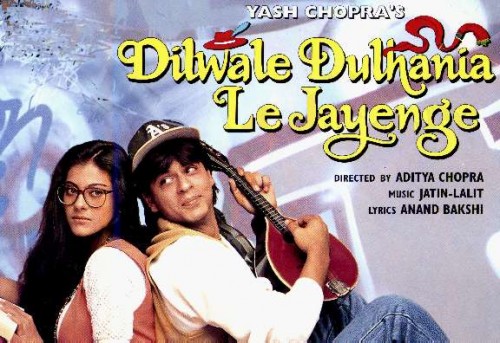 It tugged at the heartstrings of the young, middle-aged and the old alike when it released way back in 1995. Even a thousand weeks after its run at the box office, Shah Rukh Khan-starrer romantic drama “Dilwale Dulhania Le Jayenge” (DDLJ) continues to be “cherished” by youths, who consider it an “ideal love story”.

When the film, debut-directed by Aditya Chopra, released Oct 20, 1995, it came as a refreshing change as well as a clutter breaking and trend-making entertainer with all ingredients of a Bollywood masala potboiler — love, romance, comedy, action, melodrama, thrills, songs and dance — put together cohesively to tell a story of the victory of true love.

DDLJ has a simple story — a fun loving London-bred Punjabi boy Raj meets an NRI simpleton Simran (Kajol) during an European holiday. Love blossoms between them, but winning over the girl’s conservative family is not a cakewalk for the hero, who then makes every effort to take his ‘dulhania’ (bride) with him.

Such was the film’s effect that most young girls felt love was all about ‘finding their Raj’, boys idolised SRK’s ways of fighting his way to get the love of his life, while the picture perfect family scenes reflected the fun and frolic of a typical Punjabi household — whether it was Amrish Puri’s strict yet loving father’s character, Farida Jalal’s emotional motherly act or Anupam Kher’s goofy portrayal of the boy’s ‘Pops’.

Muskan Agarwal, a 21-year-old, says “everything about the movie rocks”.

“Its filmy dialogues, beautiful outdoor shooting locales to superhit songs…it’s great that the movie is completing 1,000 weeks. They should still make movies like DDLJ,” said the Bollywood fanatic.

For 22-year-old Ranjeet Rajotia, the chemistry shared by SRK and Kajol — one of Bollywood’s best onscreen couples — in DDLJ, surpasses their pairing in all their other films.

“SRK and Kajol have worked together in a lot of blockbusters but DDLJ will always be recognised as their best work till date,” Ranjeet said about the film, which won 10 Filmfare Awards, including best film, best actor, best actress and best director at the 1996 edition of the ceremony.

Produced by the late Yash Chopra, the film this year started its 20th year of uninterrupted run at the iconic Maratha Mandir cinema hall in Mumbai and it now holds the record of the longest running film in the history of Indian cinema.

While the youngsters have already seen the film enough times, watching it on the day it completes its 1,000 weeks is special in its own way for them.

“Can’t wait to watch ‘DDLJ’ at Maratha Mandir. I really want to blow whistles when SRK fights on screen and hoot when Kajol turns around during the famous ‘palat’ moment,” said Meghna Mathur, who was perhaps only a year old when the movie released.

DDLJ even appealed to those who aren’t particularly fond of Bollywood entertainers and prefer sci-fi Hollywood movies.

Said Gopal Rathore: “I’m not into Bollywood movies but DDLJ is something I’ve always cherished. It’s an all-time classic. It’s always good to watch an ordinary couple go through extraordinary lengths to be together in the end.”

A lot of emotional viewers ended up shedding tears during the movie, and it hasn’t been any different for the new generation.

“When I first saw ‘DDLJ’ it made me cry. After watching the movie, almost every girl started expecting some Raj to walk into her life and love her the same way that he did in the movie, at least I did,” said Ashra Sachdeva.

Gushes Ria Malhotra, a 26-year-old: “The scene was repeated with SRK and Deepika Padukone in ‘Chennai Express’, but nothing can beat the charm of DDLJ, where a father tells his daughter to go and live her life to the fullest with the love of her life.”