Ace filmmaker Mani Ratnam, a regular at film festivals across the globe, attends the movie extravaganzas as a movie buff because he feels every film teaches something worthwhile. 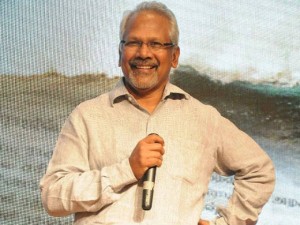 “Every film you see at a festival teaches you something. Any good film you see gives you enough motivation and adrenaline rush to produce good content, while a bad film can get you so angry that you produce even better content,” Ratnam told in a telephonic interview from his office here.

“Film fests are an opportunity to see different kinds of films that you usually don’t get to watch. When I’m part of a jury, then I get to judge films, but otherwise I attend festivals to watch two or three films a day and network with a gathering of cinema lovers from all over,” he added.

Ratnam, who has been part several film fests, both Indian and international, is looking forward to be part of the third edition of the Ladakh International Film Festival (LIFF), which is scheduled between June 27 and 29.

Heaping praise on the organisers of LIFF, he said: “The concept of a film festival in Ladakh is fantastic. I think it’s a beautiful place and its cinematic geography makes it even more fitting. It is also a proof of penetration of cinema into the nook and corner of our country. The organisers deserve to be appreciated”.

He said the setting of LIFF makes the fest even more special.

“If you look at any film fest, the setting gives it colour. Be it Goa, Cannes or even Berlin in the winter, the setting makes these festivals special and gives it a definition. I think Ladakh film fest, which takes place amid mountains and picturesque locations, is special that way,” he added.

This year LIFF will focus on Korean cinema, with contemporary Korean films taking centrestage. The fest will also include a special retrospect on acclaimed filmmaker Akira Kurosawa and tributes will be paid to late Indian actors – Farooque Sheikh and Nanda.

Kamal Swaroop’s “Rangbhoomi” will open the festival, while Anurag Kashyap’s yet-to-be-released “Ugly” will have a special Green Carpet premiere.

When quizzed about the difference he finds in Indian film festivals vis-à-vis international, he said: “In India, we have several film fests, but I think it’s celebration of cinema all over. It only varies in size, budget and the enthusiasm with which the people involve to organise it. Therefore, it’s always about different kinds of films and the warmth that’s being felt”.

Do you feel too many fests in India spoils the broth?

“In our country, cinema is a major source of entertainment. In other countries, there are other sources of entertainment. So, it’s fine to celebrate cinema in different places,” said Ratnam, known for award-winning Tamil films like “Mouna Ragam”, “Nayagan” and “Anjali”.

“We should look at India like Europe. As many languages are there, therefore, there will be as many film festivals. I don’t think it dilutes the purpose in any fashion,” added the filmmaker who also went behind the camera for his terrorism trilogy – “Roja”, “Bombay” and “Dil Se…”.

“Film festivals should not only celebrate cinema and its masters but should also encourage cross-cultural interaction. It’s an opportunity to see how films in some other countries are made versus our very own. It’s a platform to rub shoulders with talent from all over,” he said.

On the filmmaking front, Ratnam is currently busy scripting his next project. The film is said to be a trilingual featuring Akkineni Nagarjuna, Mahesh Babu and Aishwarya Rai.

“Nothing has been finalised. I’m still writing and only when I complete it, will I be able to confirm my cast,” he said.