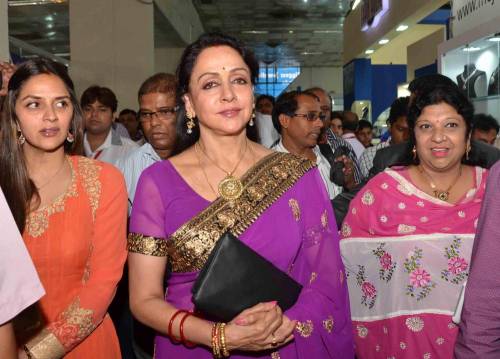 After several hectic travel schedules, veteran actress and politician Hema Malini, who turned 66 , is happy to spend a “quiet” birthday in Mumbai with her elder daughter Esha and son-in-law Bharat Takhtani. She says she looks back at her journey with “affection”.

“I was supposed to be in my constituency Mathura. But it’s impossible for me to travel right now. So this birthday is being spent with family in Mumbai, and that means Esha and her husband Bharat. My younger daughter Ahana was supposed to join me in Mathura from Delhi where she lives. And Dharamji (Dharmendra) is in New Zealand to attend a function. So, he is not here with me this birthday,” Hema said.

The actress of “Sholay”, “Seeta Aur Geeta” and “Dream Girl” fame, has been travelling incessantly of late.

“At the beginning of October, I was shooting for Ramesh Sippy’s ‘Shimla Mirch’ for two days. Then on Oct 3, I had to rush to Kanpur for a function. The organisers were kind enough to arrange a private jet,” she said.

“From Delhi, I flew straight to Mumbai in time for Karva Chauth (Oct 11). I was scheduled to be in Mathura with my constituents for my birthday. But I can’t travel any more right now. I’m exhausted. I just wanted a quiet birthday,” said the Bharatiya Janata Party’s Lok Sabha member from Mathura.

Hema wants to thank her fans for being with her for so many years.

“I don’t know what people saw in me. But I’ve only received love and respect from within the film industry and from my fans. I look back with a lot of affection at all the films that I’ve done. If you ask me to single out one film, it would have to be Gulzar saab’s ‘Meera’,” she said.

That was the Dream Girl’s dream role.

“I wish Lataji had sung for me in ‘Meera’. That will remain the one regret of my career. I even requested her personally. But she had her own reasons for not singing in ‘Meera’,” she said.

Whatever bitterness transpired at that time is now washed away. Today Hema and Lata are mutual fans.

“She gifts me the most beautiful saris. I’ve been wanting to gift her one. But getting the right fabric and design for Lata-ji is not easy. I’ve finally managed it,” she said.