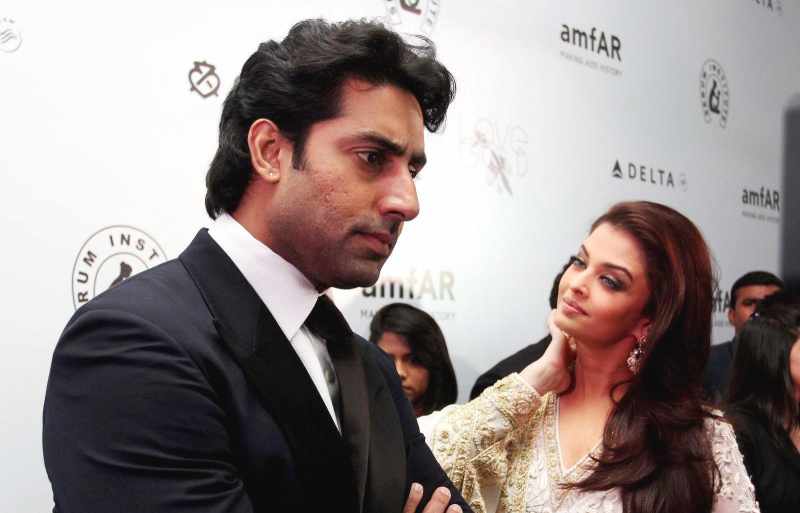 Abhishek Bachchan seems to have fallen in love with his wife all over again. The actor, who joined the former beauty queen in the French Riviera, quips “I make her look good”.

At the amfAR gala here Thursday night, the star couple made a stunning appearance, with Abhishek dressed in all black and Aishwarya making a style statement in an elegant shimmering gown. Picture perfect, Bollywood’s star couple made for a cosy and romantic eye-in-eye candid photograph at the gala.

Junior Bachchan shared the ‘moment’ with his Twitterati, and posted: “I make her look good!! Then again… anybody compared to me will look good.”

The duo, whose daughter Aaradhya is here too, played host to amfAR’s Cinema Against AIDS fundraiser here.

Abhishek has had a tough schedule. From Shimla, where he was busy shooting for “All Is Well”, he took sometime off to attend the auction of his Jaipur franchise of Pro Kabaddi league, and returned to the hill station for his shoot before leaving for Cannes.

Now, after attending to his commitments here, he has embarked on his journey back to India.

“After a great night with amfAR and getting to spend time with my girls, it’s back to India and work,” he wrote.

Aishwarya, who is attending the 67th Cannes International Film Festival event as the L’Oreal Paris ambassador, sported L’Or Lumière inspired makeup with a strong red-lip and turquoise eyes with her gold dress for the amfAR gala.

She highlighted her eyes with multiple coats of mascara and wore her hair open with soft curls.

Aishwarya reached the Cannes movie extravaganza earlier this week and has been making fashion statements one after the other on the red carpet.