Bollywood actress Preity Zinta has accused her ex-boyfriend and industrialist Ness Wadia of allegedly molesting her, sources close to her said early Saturday. 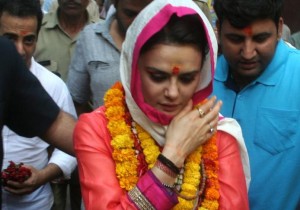 She lodged a written complaint against Wadia with the Marine Drive police station late Friday.

Earlier, TV channels quoted Wadia as denying the allegations against him as “totally false and baseless”.

However, police may contemplate any action against Wadia after questioning witnesses and examining video clips of the IPL match in Mumbai a fortnight ago when the alleged incident of molestation took place.

Wadia and Zinta are co-owners of the IPL team Kings XI Punjab.

According to sources, Preity has accused Wadia of grabbing her hand and abusing her during a cricket match in Wankhede Stadium in Mumbai May 30.

Wadia on his part has expressed shock and disgust at the developments.

Police are likely to record statements of Preity and Wadia later.