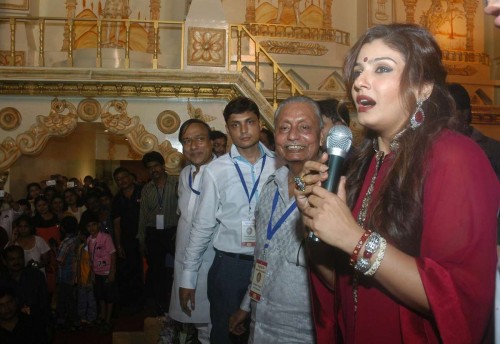 Bollywood’s ravishing beauty Raveena Tandon, who has turned 40, says there’s still so much more that she has on her to-do list in life.

Raveena, who turned a year older Sunday, feels 40 is just a number, “and a very attractive one at that”.

“I don’t know if life begins at 40. But I definitely feel I’ve many many things to do. And they’re all happening in a bunch,” she said.

Raveena spent her birthday playing cards, but there was no partying. While the card-playing went on in her house since Diwali, the birthday bash didn’t happen because of a death in the family.

“My Tauji (uncle) passed away. There was no pressure as such to not celebrate my birthday. Lekin dil hi nahin kiya (But my heart wasn’t into any celebrations). I was very close to my Tauji.”

“So, we just brought in my birthday with a quiet family dinner, with my husband and children and very close friends. The taash (cards) party that was on since Diwali continued through my birthday. In fact, extra tables had to be added since many more of our friends wanted to join in. There will be many birthdays to celebrate, I hope,” she said.

Raveena set a record in recording television software when she shot 13 episodes of her talk show “Simply Baatein With Raveena” in five days.

She is still in a daze.

“I don’t know how I did it! I was out of the country. I came back to a schedule of Onir’s film. I pushed it forward by a few days and shot all 13 episodes of my talk show in just five days. It was madness. Friends who have done television, say they’ve never heard of such a thing. But for me it’s always been that way.”

“Whatever I’ve done I’ve done on the spur of the moment.”

Raveena feels she has the best life she could hope for.

“I have a perfect husband (Anil Thadani) and two absolutely gorgeous children. I couldn’t have asked for anyone better than my husband Anil. He’s supportive, but not blindly so,” Raveena said.

“He has his own point of view on everything and doesn’t mind expressing it. He’s from the film industry and knows what I am all about. He isn’t very demonstrative whereas I like to make my feelings crystal clear. With Anil, I feel I’ve come home. I feel I can put my feet up and relax while he’ll take care of everything,” she said.

Since Raveena is so much into her talk show, here’s a rapidfire on her life.

The most important event of her life? “When I met the love of my life Anil Thadani. My life has always been a rollercoaster. Anil was a blessing. He saw me through a crisis. He gave me the strength to fight.”

The best films of her career so far? “‘Shool’, ‘Aks’ and ‘Satta’. My husband Anil has seen my films. But we’ve never discussed my performances. He did mention once that I was very good in ‘Satta’.”

The most important songs in her career? “‘Tu cheez badi hai mast-mast’ and ‘Tip tip barsa paani’. I still have boys coming up to tell me that ‘…tip tip’ was the song that helped them go from adolescence to maturity. Though I don’t want to probe into what they mean I take it as a compliment.”