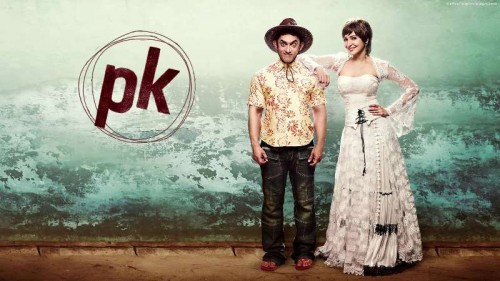 Young India is giving the thumbs up to Aamir Khan-starrer “PK” and asking why Hindu groups are denouncing a movie which they feel no way runs down Hindu religion.

Bollywood and theatre owners are equally upset over the protests which have erupted against the hugely successful Hindi film which takes a hard-hitting swipe at organised religion and godmen.

Arya Samaj leader Swami Agnivesh is in fact demanding tax free exemption to the movie, which has become one of the biggest hits from Bollywood and has grossed Rs.200 crore within a fortnight in India.

“PK”, which released Dec 19, presents Aamir as an alien who is fascinated by what he sees in India. It also stars Anushka Sharma, Sanjay Dutt, Boman Irani and Sushant Singh Rajput.

“It is unfortunate that people are staging protests. The scenes and dialogues are not against god. As a Hindu myself, I didn’t find anything insulting,” Ayonav Bagchi, 33, said.

“My sentiments were not hurt. We have seen how godmen work in India. Most are corrupt. The movie is asking people to stay away from such people, and that’s fine with me,” he added.

“What could have been a better way to portray the intoxication of Indian society doped in religious superstitions? The protest was expected from a society which remains confined in the interpretations made by Pandits and Maulvis and has lost scientific temper,” he said.

Bagchi and Aslam are among a dozen moviegoers said. All of them were unanimous that “PK” was a must see.

Rachna Puri, 26, told IANS: “I am a spiritual person. I didn’t find anything offensive. It is a unique film which focuses on an alien and his experiences when he reaches India, which is so diverse.”

Bollywood personalities came out openly in support of “PK”, wondering how a movie duly passed by the censors could be so viciously attacked.

“What kind of a democracy are we living in?” asked director Karan Johar.

The Vishwa Hindu Parishad (VHP), which has been involved in the protests along with the Bajrang Dal, wants “PK” to be banned.

VHP spokesman Vinod Bansal told IANS that the movie attacked Hindu religion and said it sought to pull the youth away from religion.

“The movie makes fun of Hinduism in every possible way… Scenes of attack on Christianity and Islam last for two minutes. For the rest of two-and-a- half hours or more, they keep making fun of Hinduism.”

Demonstrations against the movie have also come in from Agra, Bhopal, Bhubaneswar and Ahmedabad. Among those who have spoken against it are yoga guru Baba Ramdev, Swami Swaroopanand Shankracharya, Maulana Firangi Mahal and the Jamat-e-Islami Hind.

Filmmaker Uday Chopra does not agree: “What a wonderful film! I am bowled over. It is the most important film that every Indian should see.”

Added producer Ritesh Sidhwani: “PK is a must watch. I am a believer and nowhere does it hurt our sentiments or question religion.”

Film enthusiast Ishika Sharma, 25, agreed. She said: “It is not offensive. I think people are protesting because it is Aamir Khan’s film and is doing good business. They want to hog the limelight.”

Ragini Jha, 23, enjoyed “PK” so much that she has watched it twice. “It is not targeting anyone. It is not against any religion. I don’t understand why people are taking offence.”

Swami Agnivesh, a long-time Arya Samaj leader, said: “I found this film brilliant. It raises a fundamental debate on the true nature of any religion and their concept of god, the creator… The questions are very profound. The whole controversy is … by those who feel threatened.”