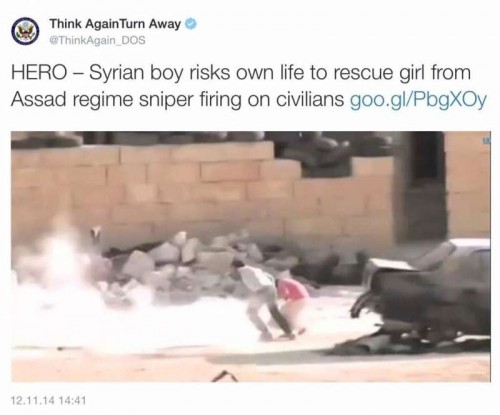 Is a lie a lie even if it is to underscore a cause that could save lives and stop bloodshed of innocent children?

Are there situations when telling such a lie becomes acceptable?

Do you end up saying I am not upset you lied to me, I am upset I cannot believe you anymore.

If things are bad enough and sick enough and horrific enough on the ground reality and nothing is being done to stop it and someone decides okay, you know what I am going to do, I am going to recreate the horror per se and I am going to underscore the sheer epic gruesomeness of things by making a visual essay that I cannot make in the place that is bleeding because I cannot get there.

Millions of YouTube viewers have been captivated by the Syrian boy hero who manages to rescue a little girl while under gunfire. It has touched hearts and brought the tragedy of the region into frightening focus.

But it was all cooked up. It was a story created by a Norwegian film crew and it was shot, not in Syria but in Malta.

Argument; Such stories of heroism by children are occurring. The telling of the truth in an era when fiction is stranger than non-fiction could be justified because by orchestrating it and having full control the cinematic impact is so much more.

So have they done the right thing for the right reasons? You want to support them?

But there is a counter argument. If we start taking liberties with the human strife and turn the human condition into a game then we are already twisting authenticity to our own ends however noble they might be.

The sad part is that if these film makers had stated this was staged nobody would have hit the ‘view’ button. They had to lie to get the truth out.

It is said that Lars Klevberg, a 34-year-old film director based in Oslo, wrote a script after watching news coverage of the conflict in Syria. His aim was to underscore the courage of children being in the battle line and he thought deception was the best vehicle.

There is no shortage of empathy and when horror is at the doorstep niceties go out of the window. But then, when do you stop? At what point do you take history and tweak it to your advantage. What if the enemy at the gate begins to do the same. After all ‘what is ‘right’ is them up for grabs.

Very tough call and also in it the risk of making trivial the real terror of war and disappointing those who have come to realise that this hero child is a figment of imagination.

So what happens when you lie and it becomes a lyric you actually end up doing a disservice to the children of conflict because the next atrocity will be brought up and questioned and it gives the perpetrators a splendid excuse; it never happened, it is lie just like that film.