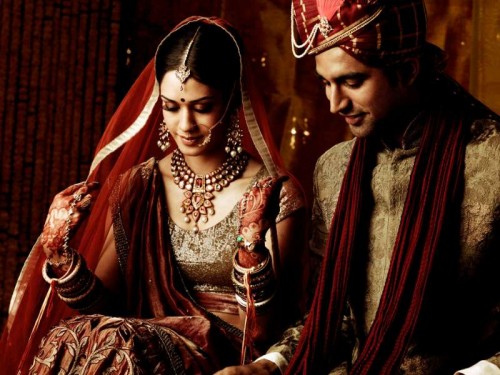 One of the risks of coming home to India is being co-opted into a game called arrange the arranged marriage. It is not a trivial pursuit and, unlike the love marriage, is played in deadly earnest. In love marriages, people either run away together, exchange promises they will not keep or, unrequited, leap into tubewells, off cliffs and bridges or onto train tracks in what is called a messy but precipitous end.

In arranged marriages there is much measuring and gauging and assessing of the merits and demerits of the “opposition” and relations and friends are cordially invited to play it and contribute their penny’s worth.

So it was I found myself at a friend’s home when he said, oh by the way Bunny’s got a match. Tennis or squash, I said, good for girls to play is what I say. No silly, he said, an offer, a boy, he’s a computer expert. Aren’t they all, I said, but hey, don’t be silly Bunny’s just a child. Bunny came in, full of cheer for seeing me. No. You’re not, I said. Not what? Not a child.

I said, oh where did time flee, my pretty one, is this the little girl whom I dangled on my knee?

You never dangled me on your knee, she said, you threw me in the pool once but knees and dangling, never.

How could you get suckered into this, I said, you’re not the arranged marriage type. I tried, she said, I fought but they won’t listen, you try. I tried. They didn’t listen.

Come with us, said Bunny, I need moral support, please, please. He can’t, he’s busy, said my pal from the past. No I am not, I said, and even if I was I’d drop everything, after all I am the godfather, I must see this…

…computer expert, said Bunny, USA returned and made a face. Next evening we fetched up at the neutral matchmaker home and I was apologetically introduced as a journalistic friend from Dubai after which we squiggled around playing musical chairs so that the boy and the girl could sit next to each other. The exercise failed because Bunny came nor’ nor’ west of him and sat next to me.

We all berthed, grinning fatuously at one another and letting silence do the painful rest. Once everyone had said lovely weather for this time of the year at least once and the boy had elaborated on his trip back from Atlanta Georgia with an in-depth rendition on the seven-hour delay at Heathrow to which every one “aahed” knowledgeably, the party was really swinging. So, Bunny whispered, score him. What? Score him on ten. Now? Yes, now. Seven, I said. Six, she said, he’s a low average six and I don’t like the way he keeps hitting his chest, could it be palsy?

No, I said, he’s going for his cigarettes then realising he can’t smoke because Mummy and Daddy ordered him not to.

Somebody said Chetan’s now into complex programming. We all looked impressed. Good for Chetan.

Bunny said, I think computer science is fascinating. Chetan smiled. His parents smiled. Bunny’s parents smiled. Not wanting to be a party pooper I smiled, too. I broke the ice, she said, I endorsed his work, that’s a positive sign, that is why we are all grinning. So what’ll they do next, I said. Food, she said, now they’ll bring food. They did. Heaps. Well, go on, I said, why don’t you build on that beginning, talk to him about computers? I know nothing about computers, she said. I thought they fascinated you, I said. Magic fascinates me, I know nothing about it. She said, no let’s ignore him from now on.

Hard disc, I guess, because Bunny didn’t speak to Chetan from then on. That’s the way the game is played. Three days later, which was yesterday, my friend, Bunny’s father, called. We’re planning Bunny’s engagement for Saturday, it’s on.

With Chetan of the compucalibre?

Yessir, they are on whats app.