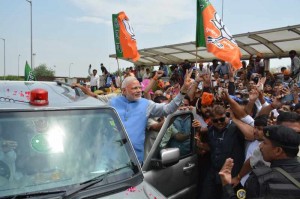 In an unprecedented move, Narendra Modi has invited leaders of all of India’s South Asian neighbours to his swearing-in ceremony as prime minister on May 26. To an extent, this is in line with his own loud thinking and the Bharatiya Janata Party’s poll manifesto to “reorient and reboot” India’s diplomacy to achieve its foreign policy goals.

In fact, since his stunning electoral success and even prior to that, there has been much speculation and anticipation about what changes he might bring in to India’s foreign policy, as not much was known about his preferences. World governments, strategic circles and the media drew various conclusions, extrapolating what he did in his 13-year rule as Gujarat chief minister and putting under microscope his statements during the election campaign and recent interviews to decipher his line of thinking and what possible road as leader of the world’s third largest economy he would take for the next five years.

Indian foreign policy is known more for its continuity than change, although of late there have been cracks in the national consensus, as some states like Tamil Nadu and West Bengal have asserted their interests and want their say in policy-making. Modi has been supportive of the states’ role in foreign policy formulation. He is said to have discussed among his close advisors and confidants the country’s policymaking in areas like trade and energy, which are inextricably liked to diplomacy and foreign policy. He has also talked about capacity building, bringing in even expertise outside the officialdom. What has also drawn attention is the way he would rope in the private sector and the active and highly networked Indian diaspora, which also participated enthusiastically in his election, as force multipliers that could bring rich foreign policy dividends.

During the election campaign, Modi has called the United Progressive Alliance government as “statusquoist”. The BJP manifesto has talked about rebooting and reorienting “foreign policy goals, content and process in a manner that locates India’s global strategic engagement in a new paradigm” and nurturing “interlocking relationships”. Former envoy Hardeep Puri, who joined the BJP earlier this year, gave an inkling of things to come when he told IANS that the landslide victory in the general election had given Modi “the mandate required to repair the relationships in the neighbourhood”.

By inviting South Asian leaders, Modi is trying to send a message to people in India’s neighbourhood who have come to see him in a certain way, and to the wider world, about possible future changes on the neighbourhood policy front where they too have interest.

Modi is taking the reigns of government at a time when the country is faced with a difficult security neighbourhood, stretching from Afghanistan to Myanmar. There is a widely shared belief that the geopolitical situation in the neighbourhood is likely to change significantly due to uncertainties in the global economy, instability in the Af-Pak region, especially in the wake of the US troop drawdown, continuing anti-India sentiments in some of the countries, demographic pressures, growth in illegal migration, and adverse consequences of climate change.

In the late 1990s, the then prime minister I. K. Gujral followed a policy that called for settling all disputes in South Asia through peaceful bilateral negotiations and espoused non-reciprocity from smaller neighbours. The countries of the region also had a positive attitude towards the principles, which was dubbed as the Gujral Doctrine. However, as it happens in this part of the world, the move floundered on the reefs of shifting geopolitical realities, particularly the antagonistic relations between India and Pakistan. Gujral’s successor Atal Bihari Vajapyee’s efforts to mend ties with a bus ride to Lahore also failed to stoke the relationship. Manmohan Singh’s visa and trade liberalization policy didn’t take off.

All this makes it imperative for India to formulate policy options and develop relations with all its neighbours. India also knows it cannot match the “checkbook diplomacy ” of China, a significant player in the region, and that there have to be more creative ways to solve strategic issues. In an interview to Open magazine earlier this month, Modi said “I will look at India, what is in her self interest will be India’s foreign policy”.

Seen in this perspective, the move to bring all leaders of the region to New Delhi and have an interaction is proactive diplomacy and a welcome one, given that India’s foreign policy in recent years has often been reactive.