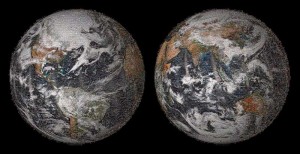 NASA has released a new view of our home planet – created from 36,000 selfies that people shared on social networking sites.

For Earth Day this year (April 22), NASA invited people around the world to step outside to take a “selfie” and share it with the world on social media.

“With the global selfie, NASA used crowd-sourced digital imagery to illustrate a different aspect of earth than has been measured from satellites for decades: a mosaic of faces from around the globe,” said Peg Luce, deputy director of the earth science division in the science mission directorate at NASA.

Users can zoom the 3.2-gigapixel image to look at individual photos.

The “global selfie” mosaic was built using more than 36,000 individual photographs drawn from the more than 50,000 images tagged #GlobalSelfie and posted on or around Earth Day, April 22, on Twitter, Instagram, Facebook, Google+ and Flickr.

Selfies were posted by people on every continent and 113 countries and regions, from Antarctica to Yemen, Greenland to Guatemala, and Pakistan to Peru.

The ‘global selfie’ was assembled after several weeks of collecting and curating the submitted images, NASA reported.