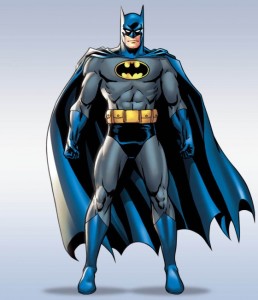 Batman, the action hero created by Bob Kane and Bill Finger that has now turned 75, again comfortably shows his darker side thanks to the latest film trilogy, with his pop psychedelic past now forgotten.

Back in the 1930s, DC Comics charged Kane, who for decades minimised Finger’s stylistic contributions, with inventing a character that could rival Superman in popularity.

If the Man of Steel had superhuman powers, the Kane-Finger duo came up with a young millionaire without superpowers but with an obsession for justice sparked by the murder of his parents, which he had the misfortune to witness.

Bruce Wayne, the real name of the tormented man with the double life, first appeared in May 1939 in the 26th issue of Detective Comics magazine.

Success came quickly for the guardian of Gotham City.

But the dark, mature Batman full of edgy traits that today’s fans associate with the graphic novel “The Dark Knight” by brilliant storyteller Frank Miller (1986), and, above all, the recent film trilogy by Cristopher Nolan — with Christian Bale as the Caped Crusader — had a campy interlude that some of the character’s most devoted followers today don’t understand.

To celebrate the superhero’s 75 years, besides special editions and material prepared by Frank Miller and Neal Adams, among other writers, a new Batman logo has been created, while July 23 will be Batman Day in the US with activities in shopping malls and bookstores nationwide.