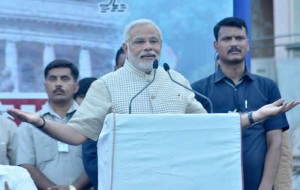 A book on BJP prime ministerial candidate Narendra Modi’s life and economic vision has been translated into Chinese and is being published by a leading university, with its release slated for early next month.

“India’s Modi – incredible emergence of a star -(peoples’ power changes a nation)” by Sinologist and BJP Rajya Sabha MP Tarun Vijay is being published by the South Asia Centre of Sichuan University, Chengdu.

It has been edited under the guidance of veteran Chinese scholars D. Xioe and Jiawei.

Vijay said that he is very excited about the warm reception to the book by Chinese readers and hopes that the release functions of the book will be held in Beijing, Shanghai and Chengdu.

The book is divided into 13 chapters like “RSS guides the way”, “A Himalayan wanderer”, “Social activism”, “The political call”, “Turmoil and turbulence” and “India awakened to a new dawn”.

Tarun Vijay had received a fellowship from Sichuan University on India-China Relations and was also a member of the India-China Eminent Persons Group.