Renita D’Silva, author of ‘Monsoon Memories’, speaks to Anjana Parikh from Asian Lite about the story of a girl named Shirin who yearns to go home. When she comes to England, her life is dry, quiet, with none of the passion, the heat, the bustle and the frenzy of home.

AL: When was the time you realised that you had the acumen to become a writer?

Renita: I have been writing from the time I was seven and discovered the wonder of books and reading. There were not enough fiction books to cater to my voracious appetite in the little village in India where I grew up. And so, I started making up my own stories. I did not know if they were any good, not then, but my friends at school enjoyed the ditties I composed while teachers droned on in the background, all of us giggling behind cover of our notebooks. And for a time, that was enough.

I studied engineering and worked in IT, got married, had children, got on with my life. Yet while doing all this, the creative part of me kept calling and pulling me towards writing. 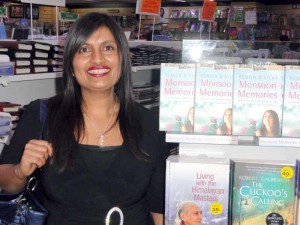 AL: Your new book ‘Monsoon Memories’ has hit the bookstores in India? Please share some memories associated while you were writing the book.

Renita: ‘Monsoon Memories’ was released in the UK and the rest of the world with the exception of India in June 2013 and was published in India in Feb 2014. I started penning the first draft of ‘Monsoon Memories’ in between writing short stories as part of the creative writing course. It was winter, but I did not mind the dreary grey winter days, filled as I was with the joyous sense of knowing that I had finally found what I wanted to do. I remember taking my kids to school, kissing them goodbye, coming home and cramming as much writing as I could manage in the hour before I had to go in to work, my fingers flying over the keys. I remember overseeing the kids playing in the chilly drizzle that was slowly turning my extremities numb, watching them digging up the sprinkling of snow and frost with a twig, and picturing a little girl finding a photograph and inadvertently unearthing an old family secret.

I remember the unparalleled joy, the sense of achievement when I typed ‘The End’ on my first book.

I think the word ‘home’ has many connotations. It is a place we look forward to at the end of a long day, a place that has warm, happy memories associated with it, a place of shelter, and a place where we can, finally, be ourselves. We wear myriad faces for others but at home, we can just be. And for an immigrant, home almost always refers to the place of their childhood, the place where they were looked after and cared for, the place they have left behind.

For Shirin, the protagonist of Monsoon Memories, home is all of the above but it is also the place she mustn’t think about, a place where something happened, something so horrible that it has wiped out everything, all the good things that went before. She cannot touch base with the person she was once and because of this, she is lost, even to herself.

And so for her, accessing her memories, trying to make peace with what happened, is a journey, an arduous journey which takes eleven years.

AL: Why did you choose monsoon as the backdrop of the story?

Renita: The monsoons I have experienced growing up in India are furious. They rage fiercely, they execute a dance that is amazing and passionate and they make sure to leave their mark, transforming the landscape in their wake. Fields sparkle, basking in the afterglow, trees and bushes glint and shimmer, lakes and rivers overflow. Farmers thank the Gods for the gift of the rains pleased that a good crop is more or less guaranteed. Shirin rages too, albeit less spectacularly, more silently. She is in constant turmoil, yearning for home and yet denied even the simple pleasure of calling it ‘home’. I wanted to set the furious drama of the monsoons against the more quiet tensions of family.

The monsoons create a backdrop for all the events that mark Shirin’s life.

When she comes to England, her life is dry, quiet, with none of the passion, the heat, the bustle, the frenzy of home. And so is the English rain: quiet, almost diffident, lacklustre just like her life has been since leaving India.

AL: What inspired you to write this book?

All my stories begin with a picture in my head. This one began as a picture of two girls sitting on a veranda listening to rain drum on the tiles. They sip sweet tea and eat vadais, snug and dry as they look out onto the roiling, mud sloshed fields where farm women sing a plaintive song as they plant paddy saplings, the plaited woven coconut frond shelters draping their backs barely providing shelter, their hands muddy and squelchy as they sew the fragile green shoots. The two girls have their whole life ahead of them. One talks non-stop, while the other pretends to listen, guilt a snake uncoiling languidly in her sated stomach. The one who talks is beautiful, confident, self-absorbed; the other shy, unobtrusive programmed to feel guilty for everything, even wandering thoughts.

The picture simmered in my head, grew into a story. I was fascinated by the guilty girl. Why was she like that, what had happened to shape her into this reticent shadow while her sister was the exact opposite? And so I started writing about her and found that the story was turning out to be very long indeed. And as I was writing Shirin’s story, Reena inveigled herself into it. Reena, eleven years old and an aspiring detective. Reena who doesn’t give up, who finds a photograph and unearths family secrets slumbering for more than a decade.

AL: Is this your debut as a writer?

Renita: Yes it is but since then I have written another. My second book, ‘The Forgotten Daughter’ is about a woman who finds out she was adopted and goes in search of her roots. It is coming out in the UK, the US and the rest of the world with the exception of India on the February 28.

You hold a bachelor’s degree in engineering and now you’re a writer as well. How has been the shift from one profession to another?

I wanted to read English at university. But when I told my mother, she was flabbergasted. While she had always encouraged my passion for books, reading, and the enthralling world of fiction, she was not too keen on my pursuing it as a career as there were no jobs going in India for someone with an English degree at the time and in a country of almost a billion people, you needed to read something you were guaranteed a career in. Writing at the time was a hobby, something I loved doing, but I did not think I could ever make a career of it. None of us had heard of many Indian writers bar Salman Rushdie and Arundhati Roy. And so, I studied Engineering and worked in IT. But all the while, my passion has remained writing. So it is absolutely wonderful that I have been able to indulge this passion, it is rewarding to see the conjuring of my imagination in book form, to have some person somewhere read my book like I devour other authors’ creations.

AL: Can you please tell us about the evolution of the book?

Renita: The book went through many drafts. I made many mistakes. The process of creating this book and bringing it through to publication was a huge learning curve. I was impatient and sent off the book after I had finished the first draft, blithely ignoring the advice given by all the writing manuals: ‘Make your manuscript the best it can be’. I got quite positive feedback, considering. Many agents asked for the full manuscript- when sending out to agents unsolicited, they usually only request the first three chapters and a synopsis and then get back once they’ve read it with either a rejection or a request for a full manuscript. The agents who asked for a full manuscript came back with myriad reasons: ‘The main character is not fully realised’; ‘The plot doesn’t work’; ‘The structure doesn’t work’; ‘The descriptions detract from the story, cut the unnecessary bits out.’ All in all, I think it went through at least four drafts and I must have written about 400,000 words in total which were condensed into 100,000.

AL: What’s the difference between yours and others’ books which too are set in India?

Renita: I grew up in a small village in the coastal town of Mangalore, a place of breathtaking beauty and generous people. I’ve read a few books set in South India but not any that I know of are set in Mangalore. On the surface Mangalore is very cosmopolitan with the Muslims, Hindus and Catholics co-existing mostly in peace but there are a lot of undercurrents and I have tried to depict that in the book, with religious tensions coming to a head near the end of the book. Also, I wanted to set the book among the Mangalorean Catholics, show that culture which is a quaint blend of Western and Indian influences, to the world. A book about the immigrant experience but also at its heart the story of a woman who tries desperately to do everything right but ends up getting it all wrong.

AL: Why do you feel that book-lovers should lay their hands on ‘Monsoon

Renita : ‘Monsoon Memories’ tackles some very sticky issues. There are themes of duty, forgiveness and identity, the conflict between generations, the pressure of a closed society and what ‘going home’ entails. It is a book about the ache for the uncomplicated memories of childhood coupled with the complications of growing up female in a land where males are considered superior. But above all, it tells a story. The story of a woman who is lost, rootless, who cannot access the memories that anchor her to her past. The story of a child who doesn’t give up, a passionate little girl who is determined to find the aunt her family has shunned. It is a coming of age novel for Reena, and in many ways, a coming to terms journey for Shirin. Many readers have said that it is a story you will love and that will stay with you long after you have finished the book. Finally, I leave you with a comment from an 82 year old woman who read my book: ‘I don’t think I will ever get a chance to visit India but this book transported me there.’