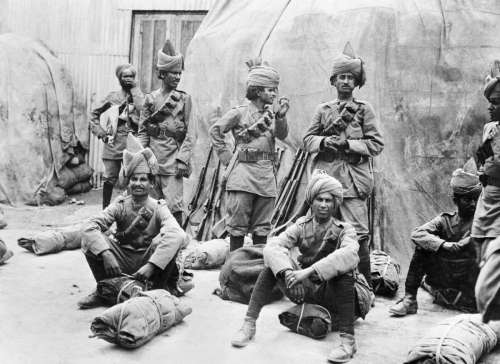 The First World War was probably the last war that soldiers went to with a sense of glory and the feeling that something good may come of it. The war itself was to prove otherwise, particularly as the leaders of the military proved inadequate to either understand slaughter on an industrial scale or to manage the administration and logistics for millions of men.

The Indian army, an all-volunteer force, was one of the few that could be thrown into the trenches to stem the tide against ‘civilization’ as the purpose of the war was defined. Raised, outfitted and equipped to fight Britain’s colonial battles in tropical climes, the Indian troops were ill-equipped to deal with a European winter. All troops were unprepared to deal with the slaughter of the trenches, but the Indians, more than the rest, were stunned by the lack of physical contact of trench warfare and by the death caused by firing at remote distances.

Great literature came out of the First World War in English, and a whole generation of Indians were exposed to the poetry of Sassoon and Owen. As the leader of the Indian expeditionary corps quite rightly noted – all combatants from Europe would have their experience in the war recorded and published – but the poor Indian soldier, who went loyally to Europe to fight a war, neither comprehended nor agreed to have a chronicler.

In that sense Vedica Kant has done a great service by writing this book about an army that lost 74,000 solders to the British cause without or at least with little dissent. In macro terms, the Indian nation’s contribution to the war was truly monumental.

Vedica has worked out that India’s financial contribution alone amounted to eight billion pounds in today’s money but nothing, of course, equals the loss in lives that the Indian army cheerfully contributed.

The first battle that the Indian corps fought in was Neuve Chapelle, where the Indian contribution helped stem the German advance and where the Indian casualties amounted to almost 5,000. Vedica has sourced much correspondence from Indian soldiers, recording their impression of going abroad, the social turmoil and the strange wonder of being sent to fight ‘white men’.

The author refers to an initial reluctance on the part of Britain to involve Indian troops in a white man’s war, for the consequences it could have on keeping the Indians without home rule after the war. But the urgency of the situation on the western front necessitated throwing the Indian army into the cauldron.

Although the soldiers went without demur, Indian nationalists expected that Indian participation would force the British morally to give India home rule after the war. As quoted, Bal Gangadhar Tilak advised Indians to buy war bonds as they would be uncashed after the war to trade for home rule. So incumbent upon the Indian soldier was the loyalty to cross Kala Pani, to die for the honour of the regiment, and to come back to India without having been corrupted by the idea that he had defeated white men.

The Germans, on the other hand, were at first contemptuous of the Indian soldier, which he soon corrected after seeing them in battle. In captivity they made every effort to seduce the loyalty of the Indian soldiers, apart from using the human pool for anthropological studies.

Later on, by 1915-16, the Indians were withdrawn from the western front and the predominant fighting occurred against the Turkish Ottoman empire. Here again there was unease that the position of the Ottoman ruler as the Caliph would suborn the loyalties of the Muslim soldier from fighting the Turks.

However, apart from the Pathans who were willing to be seduced by Turkish propaganda, the subcontinental Muslim remained loyal to the Raj. In the Middle East, the Indian soldier’s loyalty would truly be put to the test by the incompetent leadership of General Townshend.

In all, a little short of 600,000 Indian soldiers served in Mesopotamia and it must be remembered that at the time, almost 30 percent of the Indian army were Muslims. One of the most serious incidents in this campaign was the shortage of food, and the men being fed horsemeat, which resulted in many suicides.

Eventually, the war ended, but the troops went on to stay in the Middle East, to set up the boundaries of the countries, now in a state of flux as in Syria and Iraq. The driving purpose was of course oil, which had been discovered in present-day Iraq.

The tragedy for the soldier returning home was that there was no opportunity to put into practice all that he had learnt in ‘Vilayat’. Quite often the soldier was pensioned off to his village. In fact, shortly after the end of the war occurred the tragedy of Jallianwala Bagh which, conceding that 30 percent of the army was recruited from the Punjab, was a slap on the face of the Indian soldier, followed by the infamous Rowlatt Act which indefinitely stretched the wartime restrictions to civil liberty beyond 1919.