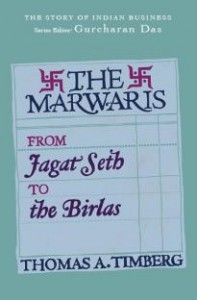 What makes Marwaris so successful as a business community that a quarter of the Indian names in the Forbes billionaires list are from the community? Is it their sense of enterprise or enormous risk appetite?

Thomas A. Timberg seeks to find out an answer to this in this book about the community, which has contributed much to the Indian economy.

Marwaris are natives of Maroo des (Marwar) in Rajasthan and are chiefly of Jain faith. The important places of Rajasthan from where the business groups come are Shekhawati towns (Fatehpur, Jhunjhunu and Singhana), Bikaner, Jodhpur and Bhiwani (now in Haryana).

The steel magnates, the Mittals, are from Bikaner. Jagat Seths were from Jodhpur state, and among the large banking families are the Daddas from Phalodi, the Dagas from Bikaner and the Malpanis from Jaisalmer.

In the 19th century, this community from the deserts of Rajasthan spread out to various corners of India. And by the end of the First World War, they had controlled much of India’s inland trade. At one point of time, they dominated most of the exporting trades like in cardamom, oranges and potatoes and practically all the import trade of consumption goods.

Gradually they turned to industry after the war and by 1970s they controlled much of the nation’s private industrial assets. In 2011 the Marwaris accounted for a quarter of the Indians on the Forbes list of billionaires.

And like all successful merchant classes, the Marwaris have also provoked envy, resentment and even loathing, particularly in Bengal where they achieved their greatest success.

Timberg compares the work ethics of the Marwaris, Banias, Jains and other business communities of India as effective as “Protestant ethic” of thrift, hard work and rationality.

He says the business lessons imparted by the Marwaris in the yesteryears are still relevant and the firms follow it. They still stick to principles like “watch the money, delegate but monitor, plan but have a style and system, lead to expand and do not let the system inhibit growth, the right corporate culture, do not get blown away by fads and do not miss new developments.”

Timberg also talks about the ability of the Marwaris to adapt to situations. A flexibility of mind, he says, is surely an important trait responsible for their extraordinary success.

The author highlights why some of the great firms declined and fell, like that of Tarachand Ghanshyam Das. The famous Birla family got its start in erstwhile Calcutta as a sub-agent to this firm.

He explains the business pattern of the Tarachand Ghanshyam Das family, Birla family and Ramdutt Goenka family among many others.

With “The Marwaris”, Timberg has returned to the subject after his first book on the community appeared on stand 40 years ago, both in English and in Hindi.

The book documents the various phases through which the community has evolved and it could well be a good reference source.

For Penguins, “The Marwaris” is the sixth volume in the publishing house’s series, The Story of Indian Business.