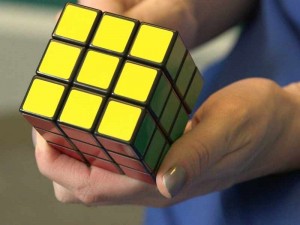 It is a simple toy whose complex solution has seduced people for 40 years.

The “magic” Rubik cube, that completes four decades, has also taken the digital leap with Google paying homage to the multi-coloured icon with an interactive doodle.

The toy’s 40th anniversary, however, is not exactly today.

The architect Erno Rubik, who invented it, fixes the general date to the spring of 1974 even though the registration in the patent office happened Jan 30, 1975.

Google is not the only one to commemorate the anniversary. New Jersey’s Liberty Science Centre and the European Commission president are among many others who have already done so.

The story of the “magic cube”, its original name in Hungarian (buvos kocka), began in the spring of 1974 when Rubik created the first such cube, not measuring 3x3x3 as we know it now, but 2x2x2.

The years following that were marked by a fight with the bureaucracy of the Communist regime to begin manufacturing the cube.

Finally, 12,000 units hit the stands in the country in 1977, according to the webpage of the Hungarian inventor.

In 1980, more than four million cubes were sold in Germany alone and the toy began to be a cult object even in the arts centres: New York’s Museum of Modern Art (MOMA) acquired and exhibited a cube in 1981, the same year as the Academy of Applied Arts (IMM) in Budapest which also has a Rubik collection.

“It is the most famous Hungarian icon throughout the world,” Agnes Prekopa, art historian at IMM, told Efe.

Its shape, the material and the look of the toy does not adhere to the graphic design trends of the 1970s, it’s “something timeless” that inspired many artists and designers, Prekopa elaborates.

Rubik is an architect who was teaching at the Hungarian Academy of Applied Arts where he decided to explain spatial relationships to his students with a tri-dimensional object. And thus, the cube prototype was born.

The enigmatic creator, who only speaks to the media on rare occasions, explains that he “discovered”, not invented, the cube. “In my opinion, it’s a part of nature, and it’s not an artificial object; it’s something natural,” he says on his webpage.

Till now, more than 400 million of these cubes have been sold.

The complexity of the object is demonstrated by the fact that it has more than 43 trillion possible permutations which guarantee that one is entertained for a long time, but which can also lead to anguish in some cases.

“I become desperate only to see those colours, those small faces within the cube, and to think of the possible solutions,” Emma, a professor from Budapest, told Efe.

For others, such is the passion for this toy that there are championships that record the time taken to solve it. According to the World Cube Association, the Hollander adolescent Mats Valk set the record in March 2013 for solving it in 5.55 seconds.

In this last and complicated version, the player observes the cube for a few seconds after which his eyes are covered so that he can solve it without seeing the coloured faces of the toy.

In 2011, artists, including the US designer Pete Fecteau, created a mosaic of the portrait of the civil rights activist Martin Luther King Jr. using 4,242 Rubik cubes.

Nowadays, there are 4x4x4 cubes for people with eyesight problems known as “mirror” that are composed of different shaped units, which when assembled become a cube, among many other complex formulas inspired by the original toy.

During the last four decades, the cube has come to be “an icon of European ingenuity”, Jose Manuel Durao Barroso, European Commission president, said in a lunch hosted for the Hungarian architect.

Budapest is expected to build a museum by 2017 presenting Hungary’s “intellectual achievements” in a building shaped like the Rubik cube, although that project is yet to take off.