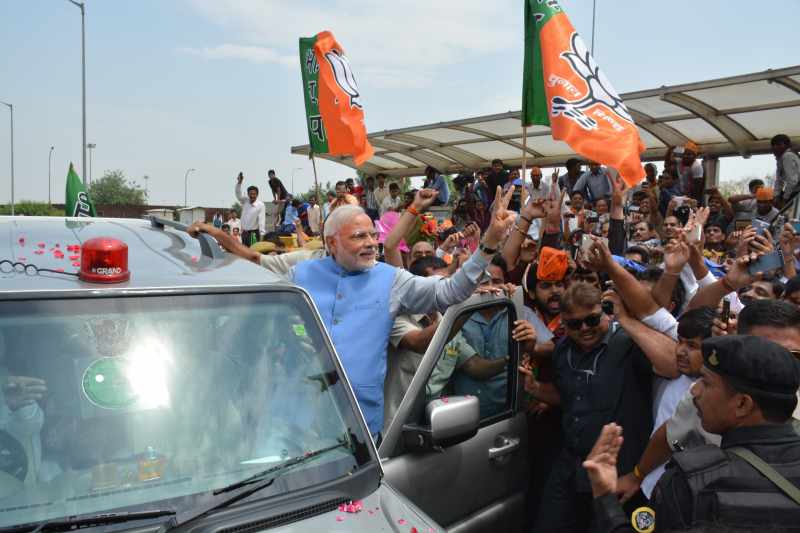 Kudos to the markets for pricing in not just the direction but also the magnitude of the Modi led BJP sweep across the Indian electorate. The last time a single party won a majority was in 1984 with the Congress winning 414 seats.

The markets were trading at lifetime highs of around 7,550 – a gain of 5.5 percent on the Nifty after the initial trends were clearly indicating a comfortable NDA majority in the Lok Sabha. However, the markets finished the day only about a percent higher taking support at 7,200 on the Nifty. It was the typical “buy the rumour, sell the news” market price action. Foreign money had been flowing into Indian equities since February in anticipation of a clear mandate towards growth and development – the cornerstone of the BJP’s election campaign.

There was talk of the market possibly hitting the upper circuit if the BJP attained clear majority in the lower house. However, that event would have pushed the market to irrational levels which could not be justified by any fundamental metrics. Sense prevailed May 16th as market participants booked profits after a parabolic up move over the last few weeks. This should also come as good news to the retail investor who has been sitting on the sidelines for the past couple of months and would get the opportunity to enter Indian equities at current reasonable valuations.

So where are we on the valuation front at this juncture? Should we remain bullish on Indian equities after the markets have moved up sharply over the past few months? It seems so. According to UBS, the market is still trading at 15.2x one-year forward PE, very close to its 5-year mean. Further, the Nifty fair value of 6,900 is based on 15x PE and 15 percent earnings growth expectation in FY15 – not over stretched by historical standards. They further add that going forward, investors will be willing to give a premium for growth hope and also look beyond FY15 earnings estimates. By end of 2014, investors would start looking at FY16 estimates. Based on their top-down expectation of 15 percent earnings growth in FY16, and 15x PE, a Nifty target for end-2014 at 8,000 seems highly probable. There could be upside to this target based on how policymaking evolves over next few months, which could flow through to earnings estimates and multiples higher than average.

Global cues will also provide strong tailwinds to the next up move. The US taper has not led to a slowdown in the economy and equities keep inching higher on the back of strong economic data. Further, US yields and the US dollar have not risen as rapidly as the market had feared – thus aiding the macro recovery. Further, even as deflation is a potential threat to the Eurozone and the Japanese economy, the central banks stand ready to inject further liquidity as has been clearly communicated at recent monetary policy meetings. Chinese officials too have stepped in with stimulus to ease the credit crunch. Thus, there is a low probability of a major stock market sell-off in the near term.

Sectors such as Information technology and pharmaceuticals, which have a substantial weight in the benchmark Nifty, are likely to underperform in the near term as the rupee strengthens and sector rotation takes place towards the more cyclical plays such as financials and infrastructure. If this is not the case and investors buy into IT and Pharma on expectations of higher earnings growth and multiple expansion, we can expect the Nifty to trade well above the 8,000 mark by year end. Further, as the economic cycle picks up, investors must look to increase their exposure to mid-cap and small-cap stocks. The index value of 7,200 is reflective of the huge moves large-caps such as Reliance Industries, L&T, private banks and a few other select blue-chips have witnessed.

Historically, on the back of a positive election outcome, mid-caps outperform
Modinomics has arrived. The path to strong long-term economic growth implies some pain in the short term, especially given the fiscal consolidation imperative and inflation moderation target. RBI is widely expected to keep interest rates unchanged in its June meeting. However, keeping the potential longer term secular bull run in mind, it is the right time to buy Indian equities. The pullback of Friday’s trading session was a healthy dip and it is too soon to book profits in India. Stay hungry, stay bullish.