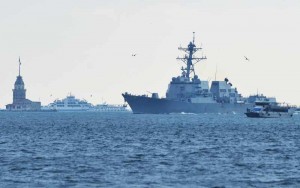 “Brahmos’ representatives successfully conducted the installation test-firing of the cruise missile from the launcher in coordination with the Mumbai-based Mazagon Dockyard Ltd, which built the warship,” a senior naval official said here, about 500 km from Bangalore and 660 km from Mumbai.

Though the lead ship in its class was launched in 2006, it has been undergoing sea trials for its commissioning into Indian Navy later this year.

“The dockyard will hand over the 6,800-tonne guided missile ship to the navy over the next two-three months after completing all trials for commissioning later this year,” the official said.

A naval officer, Commander Kuntal Wadhwa, was killed and many workers injured March 7 when a valve on a carbon dioxide bottle malfunctioned during a test of the vessel’s fire-fighting unit at the dockyard.

“It is a standard procedure to test-fire any weapon onboard the warship to assess its capabilities and operational parameters during trials,” the official noted.

The destroyer is part of the navy’s ambitious Rs.15,000-crore project 15-Alpha series, in which two more warships – INS Kochi and INS Chennai – are being built at the dockyard despite cost overruns and deliveries behind schedule.

“The cruise missile has been deployed in many of our warships, including frigates and Russian-made Talwar class vessels,” the official added.

Brahmos has also developed aerial and land variants of the weapon system for deployment by Indian Air Force and Indian Army.