The government  on Saturday reviewed its preparedness to deal with price rise in case of a probable deficient rainfall this year.

A committee of secretaries, headed by the Cabinet Secretary Ajith Seth, reviewed the current price situation and preparedness for a probable impact of a deficient monsoon on prices of essential commodities. 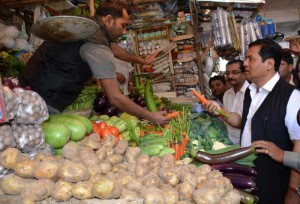 “The cabinet secretary took a meeting of committee of secretaries to review prices of essential commodities,” an official statement said.

It is feared that the onset of an El Nino factor can lead to a deficient monsoon. The Reserve Bank of India (RBI) in it second bi-monthly monetary policy review for this fiscal listed some upside risks to the economy like a sub-normal or delayed monsoon due to El Nino effect.

Latest data show that consumer price-based inflation rose to a three-month high of 8.59 percent in April largely due to higher food prices.

Rising prices and containing inflation was a major issue in the general election in which the Bharatiya Janata Party (BJP) emerged victorious.

The meeting took place a day after the monsoon had its landfall in Kerala, a day later than expected.

Once the southwest monsoon sets in over Kerala, it advances northwards and covers the entire country by July 15.

Monsoon is a key factor in containing prices as about majority of agriculture production is dependent on rain feed system of irrigation.

Industry lobby Federation of Indian Chambers of Commerce and Industry (Ficci) has called the price situation the single biggest challenge for the new government.