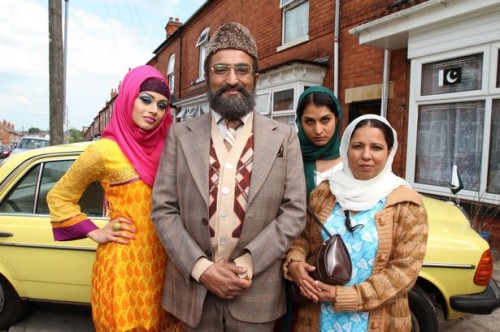 Having watched the Christmas episode of Citizen Khan I don’t know what’s more excruciating. Having both legs and arms amputated with a blunt hacksaw whilst having your teeth pulled out with a pair of pliers and simultaneously having needles gouged into your eyeballs by a maniacal psychopath pretending to be a health professional without anaesthesia. I would still rather have the former done to my person than watch the aforementioned light entertainment programme funded by the taxpayer again.For it to be commissioned for another series can only mean it is done purely for the reason that it ticks certain Danny Cohen boxes. Everybody reading knows what these are and the only reason it was ever dreamt up in the first place. I think this is the reason the equally dreadful and unfunny Count Arthur Strong is on our screens. If you’re making that you’ve got to make this, so we have to suffer twice.

We always get told to switch over, I readily would if it wasn’t for the occasional knock on the door.  ‘Do you have a television in the property?’  Unfortunately for most of the inhabitants of these isles it’s another compulsory stealth tax nobody has any choice in and neither do we have any choice where the billions collected get wasted, mostly on drivel like this.

Citizen Khan, I’ve finally got to it, is set in Birmingham, Sparkhill to be precise with Adil Ray (the creator) playing the main character Mr Khan. Reminiscing someone from his childhood probably. It’s so bad it’s not worth researching and finding out what the inspiration behind it really is, so I’ll just surmise and guess or both.

Oddly he doesn’t speak Punjabi or Urdu neither does his wife or anybody else which for me immediately dilutes any authenticity the programme was wanting to give but that was never the modus operandi. It’s all lampoonery from the start,  anything credible was binned with the Pataks and the ready made chicken tikka masala in the faux Sparkhill kitchen.

This is a programme for under 10s or anybody who is not Asian, I don’t know any that actually watch it. It is toe curling and cringey in most parts and something you laugh at and not with.

In this edition one of the daughter’s gave birth, the highly original Christmas nativity baby Jesus connection interspersed with the old man having flashbacks about I don’t know what and becoming a grand dad, that was really about it. Nothing else really happened in half and hour apart from some nonsense about a home birth with a new age unwashed type and that joke lasted the whole 30 minutes. Withstanding that absolutely nowt, which was remotely amusing any road.

The strangest character in all is the son in law Amjad, played by Manchester actor Abdullah Afzal. Now the accent he has in the programme you would think has been taught to him by a voice coach, but you would be mistaken. Having met him that is exactly how he talks in real life. Plucked straight from Rawalpindi you would have thought not near the environs of Rusholme (some would say they’re the exact same place ). He is the Frank Spencer of the show and in a word terrible at even mimicking that.

The mother and all the others should have their equity memberships revoked immediately because there has to be a standard that has to be attained to join and from this showing they must fall way below that threshold.

A petition should start forthwith online to stop the commissioning of the next one. Anybody could see they’re scraping the barrel now and already it’s run out of steam. No need for the Daily Mail or Mr Farage to get involved in this one. This crosses all political divides and leanings and it is something everybody will agree on that it is simply not funny.