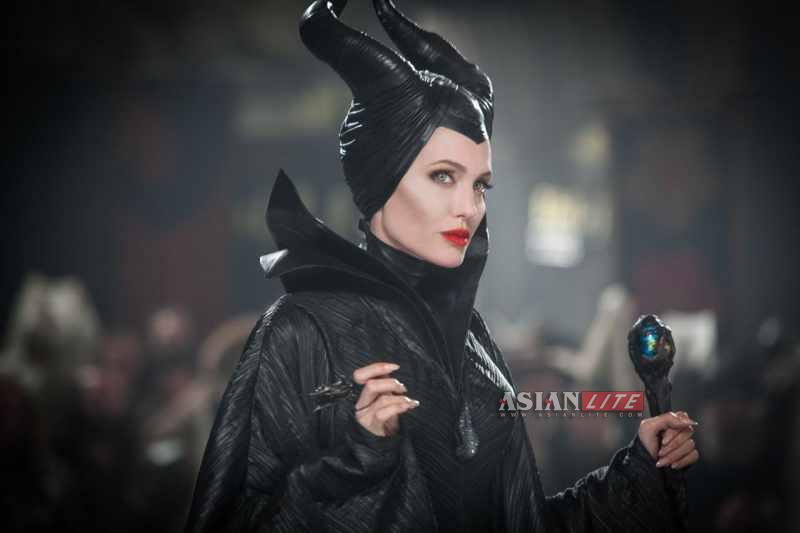 God save the classic fairytales and their antagonist! “Maleficent”, Disney’s rehash of “Sleeping Beauty” is a case in point.

At the very onset, the unseen narrator voiced by Janet McTeer, advises the viewers, “that the story we think we know, isn’t the truth”. It is an intriguing way to upend expectations and give the filmmakers a blank slate. But it’s soon obvious that there’s not a lot of narrative ingenuity here.

Torn between good and bad; right and wrong; greed and true love; “Maleficent” is the story of a wicked fairy with horns and wings, who casts a spell – the one about pricking her finger on a spinning wheel – on the princess Aurora (Elle Fanning), nicknamed “Sleeping Beauty”.

The plot line marks the transition of Maleficent (Angelina Jolie) from a sweet caring young fairy who falls for an equally caring human orphan, Stefan (Sharlto Copley) to the wicked character that she is made out to be.

As the protagonist in the film, director Robert Stromberg humanizes Maleficent and converts her simple, “wicked” character trait from the original to a complex and convoluted one. In fact, the film gives a chance for the villain to tell her side of the story and deconstruct an image that is well imprinted in the viewer’s minds.

But the problem lies in Linda Woolverton’s script. The pace of the narration is lackadaisical and lacks flourish and to top it all, the arc of each character juggles to find a foothold.

In the early scenes; sweet and affable characters are played by Isobelle Molloy and Michael Higgins and as teens by Ella Purnell and Jackson Bews. It’s only as adults that the equation takes a volatile turn in terms of appearance and character graph.

Angelina Jolie as the adult Maleficent, with her sharp-etched high cheek bone is more plastic than toxic. As protector of the Moors, her wickedness is doused with her caring attitude and the evil just does not surface. In the beautifully orchestrated suspense and terror scene, where Maleficent attends the christening of King Stefan’s child, Aurora, her cruelty is justified. It invokes the Disney’s cutesy treatment that ruins it for her.

On the other hand as adult Stefan, Shartlo Copley’s sudden conniving ambition seems to be tailor-made to fit the jigsaw puzzle. And then over a period of time, hounded by guilt and bogged by insanity, he suddenly gets into the confrontational spirit with Maleficent. That is far-fetched and unconvincing.

Humour is injected by the shape-shifting Sam Riley who plays Maleficent’s Man Friday and the three bickering pixies; Imelda Staunton, Juno Temple, and Lesley Manville who play foster aunt to the little princess.

On a separate note, it is interesting to see Jolie’s little daughter Vivienne Jolie-Pitt take her screen bow as the five-year-old princess.

Technically, the film does not lack in any division but the picturesque setting along with the visual tones and the background score offers nothing exclusive. Also, the 3D effect is unwarranted.

Overall, “Maleficent” has a magical and mystical feel along with a different perspective of the wicked fairy, but it fails to enchant or bewitch the viewer.