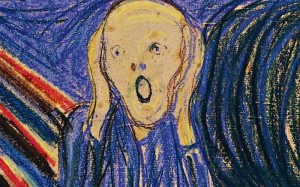 You may have noticed your stomach tying itself in knots and heart beating faster when faced with a long deserted road while driving or sound of footsteps as you walk alone in the dark. The fear often lurks in the gut.

Now, researchers have been able to prove for the first time that our ‘gut instinct’ has a significant impact on how we react to fear.

“The innate response to fear appears to be influenced significantly by signals sent from the stomach to the brain,” said Urs Meyer, a researcher from Swiss Federal Institute of Technology in Zurich (ETHZ), Switzerland.

At the heart of this dialogue between the brain and abdomen is the vagus nerve that transmits signals in both directions – from the brain to our internal organs and from the stomach back to our brain.

In experiments over rats, Meyer and his team turned this two-way communication into a one-way street – enabling the researchers to get to the bottom of the role played by gut instinct.

In the test animals, the brain was still able to control processes in the abdomen, but no longer received any signals from the other direction.

Nevertheless, the loss of their gut instinct did not make the rats completely fearless.

In a conditioning experiment, the rats learnt to link a neutral acoustic stimulus – a sound – to an unpleasant experience.

If the researchers switched from a negative to a neutral stimulus, the rats without gut instinct required significantly longer to associate the sound with the new, neutral situation.

“This also fits with the results of a recently published study conducted by other researchers, which found that stimulation of the vagus nerve facilitates relearning,” Meyer noted.

The results show clearly that the stomach also has a say in how we respond to fear, researchers concluded.