In what could pave the way for new pharmaceutical drugs and therapeutic options that reverse the alterations produced by alcohol, researchers have identified, for the first time, the damages caused by chronic excessive abuse of alcohol to the brain at a molecular level. 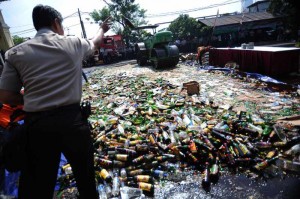 A file photo of anti-alcohol campaign at a
police station in Jakarta, Indonesia

The research team has determined the alterations produced in the neurones of the prefrontal zone of the brain.

This is the most advanced zone in terms of evolution and controls executive functions such as planning, designing strategies, working memory, selective attention or control of behaviour.

During the study, researchers from the University of the Basque Country in Spain and University of Nottingham in Britain analysed the postmorten brains of 20 people diagnosed with alcohol abuse/dependence, alongside brains of 20 non-alcoholics.

Studying the prefrontal cortex, the researchers detected alterations in the neuronal cytoskeleton in the brains of alcoholic patients.

These changes in the neuronal structure, induced by ethanol ingestion, can affect the capacity for making connections and the functioning of the neuronal network.

“This could largely explain alterations in cognitive behaviour and in learning, attributed to persons suffering from alcoholism,” researchers said.

The study appeared in the journal PLOS One.