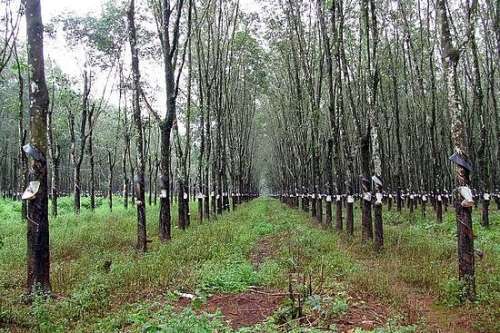 Natural rubber planters, especially small growers from Kerala, have petitioned the union government to impose anti-dumping duty or increase import tariff to protect them from falling prices in the domestic market.

“We have urged the government to impose anti-dumping duty or hike tariff on surging imports, as prices of rubber varieties declined 16 percent during eight months this year,” an official of the commodity planters’ representative body said here.

Worldwide, price of RSS III variety also declined sharply 21.5 percent to Rs.129 per kg in eight months of this year from Rs.165 a kg in like period in 2013.

“There is an urgent need to safeguard interests of small growers, who number over a million, as production cost has shot up due to increase in inputs, wages, and transport,” United Planters’ Association of South India’s (Upasi) commodities’ head R. Sanjith said at its 121st annual conference here, about 520 km from Chennai.

Of the four commodity plantations (tea, coffee, rubber and spices) across the three southern states, rubber growers have been reeling under crisis over the last 40 months, as prices plunged to Rs.144 per kg in May this year from a high of Rs.243/kg in April 2011, while cost of production and increase in wages have steeply gone up.

Shift in imports from Indonesia and Vietnam than from Thailand by the user industry also contributed to the crisis in the sector, as tyre manufacturers started using technically specified rubber (TSR) variety than RSS IV & V as raw material.

With domestic production not keeping pace with rising demand, the user industry has been importing huge quantities, as the landed cost is lower than falling domestic prices.

“Even after levying 20 percent import duty, landed price is lower than the domestic rate, resulting in lower demand for native rubber. Moreover, prices from Indonesia and Vietnam are not known in advance unlike from Thailand in past,” Sanjith asserted.

The association has also asked the central government to revise the standard input and output norms to limit imports, which surged 68 percent to 100,800 tonnes in first quarter (April-June) of this fiscal (2014-15) from 59,553 tonnes in same period of last fiscal (2013-14), as the industrial sector started using more SMR-20 (Standard Malaysian Rubber) grade than the native RSS variety.

“If prices decline further, majority of growers may be forced to abandon rubber cultivation or switch over to other plantation crops if the government does not step in to safeguard their interests and protect from import onslaught,” Sanjith observed.

Planters also want the government to study rules on fixing import quantum under the advance licensing scheme or duty exemption entitlement certificate, which is fixed on the basis of standard input-output norm.