She may be 80-years-old, but Ummi Abdulla, an expert in Kerala’s Moplah cuisine, is still busy writing recipe books and anchoring food festivals in Chennai and Bangalore.

“I am now working on a cook book listing out 50 types of Puttu. I have already completed two books – one each in Malayalam and English. The Malayalam book will be published soon,” Abdulla said here. 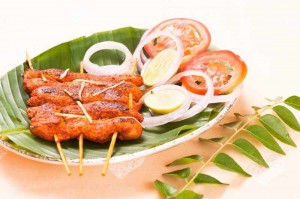 A resident of Kozhikode in Kerala, Abdulla, an author of six books, is anchoring the Moplah food festival at Ente Keralam – a fine dining Kerala cuisine restaurant chain in Chennai (May 28-June 15) and Bangalore (June 11-29).

“This time we are offering a couple of new Moplah dishes apart from the main items that were there during the last year’s edition of the festival,” Abdulla said, offering a chilled Muthari Sherbat – a cooler made with palm sugar, ragi and fresh coconut milk.

Hundreds of years ago, many trading Arabs to Kerala stayed back, marrying the beautiful Keralite women. The Moplah is derived from the word Tamil word “maappillai” or the new groom/son-in-law, which colloqually, becomes “maaplai”.

The Moplah community is made up of Malayalam- speaking Muslims living in Kerala’s Malabar region with their roots in Arabic countries.

The vegans have to forgive Ente Keralam as all the starters are non-vegetarians while seafood lovers can dive into the dishes.

The taste buds that got soothed by Muthari Sherbat suddenly got activated by the spicy mussels dish, which in turn brought all the senses alive.

The crunchy Malabar Konju Porichathu vanished from the plate in no time.

Speaking about the Puttu recipe book, Abdulla said: “The difference will mainly be in the Puttu’s filling, which could be fish, prawns or other items.”

The cylindrical-shaped Puttu is a South Indian dish made with ground rice and coconut. The Pineapple Puttu at Ente Keralam is one item that should not be missed.

As usual, the Karimeen Pollichathu – the standard feature in Kerala cuisine restaurants here – tasted good but for the problematic bones that continued to interrupt the plate-to-mouth Moplah mission!

“In Kozhikode, this dish is not very famous as people prefer sea fish,” Abdulla said.

For those who want rice based dishes there are different kinds of Malabar Biryani’s -chicken/mutton/prawn/fish/mussels.

On the vegetarian side, there is Muruingakka Manga Curry (drumsticks and raw mango curry) and Vendakka Mulakittathu (okra cooked in spicy tangy red chilli gravy tempered with mustard and curry leaves) and vegetable Biryani.

According to Abdulla, the Meen Poricha Kakkam is made by first frying the fish and coating it with a thick masala paste.

The three Pathiris go well with all the dishes.

For the sweet lovers, there is Mutta Mala (delicate egg yolk garland with steamed egg white pudding), Unnakal (cotton pod-shaped delicacy made with nendram bananas) and Pazham Mirachathu (Kerala banana stuffed with coconut and sugar), among others.

The average meal for two would cost around Rs.1,000-1,200. The Moplah feast is available for lunch and dinner.