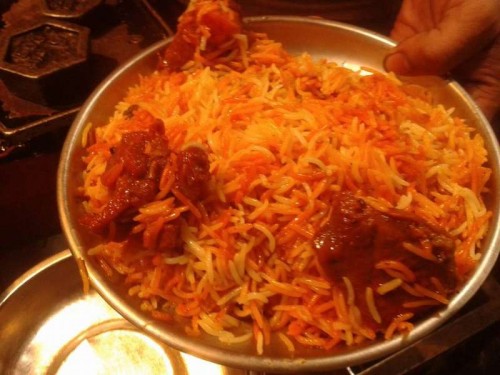 From eateries in the bylanes of the Walled City that evoke nostalgia to fancy restaurants that serve Japanese Sushi to Mexican salads, Delhi is a foodie’s paradise. But when it comes to savouring authentic Mughlai food, nothing can compete with Old Delhi and its charm.

A paradise for lovers of non-vegetarian food, these bylanes promise you an enhanced gastronomic experience.

Forget the larger establishments; there are ample culinary nests that offer some of the finest Mughlai dishes, from mouth-watering biryanis to sizzling kebabs.

There is, for instance, Haveli Azam Khan in the Chawri Bazaar area. Its forte, khansamas,whose skills have been handed down from generation to generation and shahi bawarchis, whose forefathers cooked for royalty and who today oversee the various eateries in the area.

Taufeeq ki Biryani is one of them, representing the fourth generation of the business. Though he could not recollect the exact year when the restaurant was started he was sure of it being more than 80 years old.

The mesmerising aroma of the biryani wafts in every corner of the restaurant a testament of the unique masala that is a closely-guarded family secret.

“We make our own biryani and korma masala. We don’t believe in manufactured masalas. The process is an inherited one. I will pass it to the next generation,” Taufeeq said.

“The masala is being made the same way as it was done when the restaurant was established, he added.

Then, there is an eatery that specialises in nihari.

Shabrati Nihariwale was started in 1957 by Haji Shabrati and his legacy has been continued by his son Mohd Ilyas, a veteran photo journalist.

“I want to continue what my grandfather started. The restaurant is our identity,” Shoaib Ilyas, representing the third generation of the business, told IANS.

“The process of making nihari is what it was during the Mughal era. Home-made masalas, handed down by our forefathers, are the secret of our success,” added Shoaib before he clammed up.

Nihari comprises soft and juicy pieces of meat with burst of flavours over which is spread a dash of desi ghee and with chopped green chilli spread over the top served with leg pieces of lamb.

For these restaurant owners, the recipes are their livelihood. They want to keep them a secret to maintain their exclusive taste.

Asked whether he planned to open outlets in other parts of the city, Taufeeq said: “We have earned our name and fame from this place. We don’t want to open any outlet.”

“Making profits is not our aim. We do it because we love to serve our delicacy. Cooking is an art and we want to continue with what we have,” said Shoaib Ilyas.

So without any delay, take a day out of your busy schedule and wolf down these Mughali delicacies.

Both outlets are located in Haveli Azam Khan, near Chitli Qabar, Turkman Gate. Nearest Metro staion: Chawri Bazar and from there by cycle rickshaw.