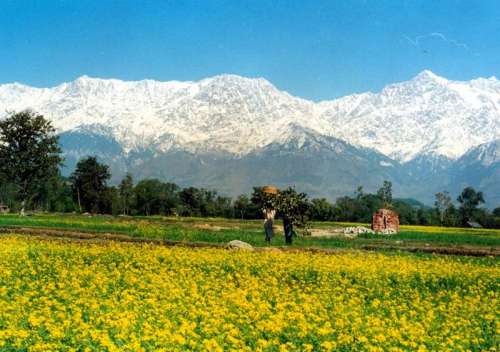 In a uniqe initiative to make tourism business more fruitful in Himachal Pradesh, the state tourism department is all set to take tourists to apple orchards, far from the maddening crowd.

“We are going to link tourism with our apple industry, both major contributors to our economic development, by offering an opportunity to our guests to visit the orchards located across the state,” Himachal Pradesh Tourism Development Board vice chairman Vijai Singh Mankotia said.

He said the board would hold a two-day apple festival in the state capital Sep 25-26 in association with the state horticulture department.

“We have invited the apple growers to the festival so that they could showcase their products and allure tourists to their orchards,” he said.

The former tourism minister said since most of the rural homestay units are located amidst the orchards, the festival would be an opportunity to promote these off-beat destinations.

“A chance to pluck apples and milk cows amidst a rural setting is certainly going to make city slickers gung-ho,” Mankotia added.

The rural homestay scheme, started in 2008, succeeds in driving tourists from traditional hotspots like Shimla, Dharamsala and Manali to offbeat destinations.

At present, over 550 homestay units with a room capacity of around 1,500 have been registered with the state. Out of these, over 187 alone are in the Kullu-Manali region. The Shimla and Dharamsala areas have 77 and 69 units respectively.

Dev Rattan of Rattan Cottage, a homestay unit in the picturesque Sangla Valley in Kinnaur district some 275 km from Shimla, said: “We are going to participate in the apple fest to showcase our orchard.”

He said this is the best time to visit the area as harvesting of apples has just picked up and winter has set in. “One can pluck and relish the fruit or even can see laborious jobs from plucking to packing the fruit to lugging the boxes.”

The picturesque Sangla Valley is known for rich tribal culture and traditions.

There is a local tradition to welcome the guests with a garland of dry fruits and a round Kinnauri cap with green flap. It’s also known for legally brewing two popular drinks, ‘angoori’ and ‘ghanti’.

While the former is made from distinctively flavoured black grapes grown in high altitudes, the latter is made from locally grown apples and apricots.

Mankotia said during the two-day apple fest one gets a chance to relish delicacies made only of apples at a food festival.

Meet Singh Malhotra, executive chief of the Oberoi Group’s Clarkes Hotel, told IANS that 15 apple dishes, most of them forgotten but prepared in classical and authentic way, would be displayed at the company’s three properties in Shimla during the festival.

These include apple strudel with creme anglaise, apple flavoured macaroons, mini apple croissants, apple-laced tea and beverages and rosemary tart. All priced at only Rs.50, he added.

Horticulture is a vital sector in the state’s economy as it generates more than Rs.3,200 crore ($525 million) annual income.