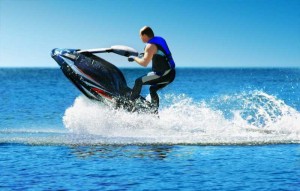 With changing times and its competitors catching up, Kerala Tourism has decided to promote water adventure sports, a minister said Thursday.

Tourism Minister A.P. Anil Kumar said that as all states are becoming tourism friendly, Kerala too has to look for newer programmes and projects.

He said water sports like white-water kayaking, para-sailing, seaplanes, mini-cruise ships and development of adventure sports in the state’s lakes with water scooters could be explored.

“Last year, we had the first white-water kayaking contest at Tusharagiri in Kozhikode and 10 teams from abroad participated. The season this year has already begun and Chief Minister Oommen Chandy will witness 20 foreign teams taking part in a contest July 26,” Kumar said.

The Kerala tourism department is particularly interested in developing the hilly district of Wayanad as an adventure water sports destination and has already put in Rs.4 million.

The minister said they are preparing to launch para-sailing in Thiruvananthapuram and Kochi.

The tourism department’s prestigious seaplane services will be launched during the coming Onam festival season in September.

“All hitches have been cleared and this is going to change the face of Kerala tourism as tourists can depart from major destinations like Kollam, Alapuzha, Bekal and Bolgatty,” Kumar said.

He said the tourism and ports departments have jointly worked out a new product by launching a luxury mini-cruise ship which will be open for service on the sea between Kochi and Vizhinjam, near Kovalam, in September.

“It’s going to be a mini-ship with around 200 seats and the journey would be through the sea and is expected to take around six to eight hours,” the minister said.

Asian News from UK
Leading Newspaper for Politics, Business & Economy
Kerala Korner
We use cookies on our website to give you the most relevant experience by remembering your preferences and repeat visits. By clicking “ACCEPT ALL”, you consent to the use of ALL the cookies. However, you may visit "Cookie Settings" to provide a controlled consent.
Cookie SettingsREJECT ALLACCEPT ALL
Manage consent