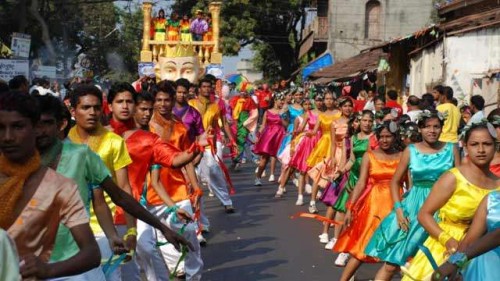 Known as a balm for the soul, music could just bail out Goa’s floundering tourist season this year.

With tourism industry stakeholders fearing a drop in Russian charter tourists by as much as 30 percent this year – largely due to the troubles in Ukraine – music festivals that have already lined up their gigs for the long year-end party could see the tourist season through for Goa.

The first big electronic dance music (EDM) event of the season Oktoberfest Goa 2014 has already set the ball rolling at Baga, a popular beach in North Goa, with the three-day event where international musicians and DJs jammed together with local musicians.

“International artistes are interested in performing in India because of the growing interest and large fan base in the country. Hence we see artistes from all over the world coming to India for individual performances and festivals,” event organiser Munna Ruknuddin told IANS.

Wild music parties are not new to Goa, which has traditionally been a hub for trance music thanks to the hippy presence here way back in the 1960s and 1970s.

But there’s more to Goa’s tryst with music, said a spokesperson for Sunburn, billed as Goa’s biggest music festival and which pioneered high profile EDM parties in the state.

“Goa has a long history of music events, from traditional Konkani songs to Portuguese orchestras to Goa trance. Goa is the ultimate tourist destination and the pride of India. We are happy to end the Sunburn calendar year in Goa. It’s nostalgic and emotional for us,” the spokesperson said.

This year’s Sunburn will be organised at the Vagator beach December 27-29.

The last time around, Sunburn claimed to have fielded eight out of the world’s top 10 DJs and credited this to the increasing maturity of Indian EDM lovers.

“Fans are experimenting and finding new genres that they appreciate and dedicate themselves to,” the spokesperson noted.

The other mega event of the year is Vh1 Supersonic organised by Integrated Network Solutions, whose business head Jaideep Singh said that Goa is one of the perfect backdrops for music festivals.

Quoting a FICCI-KPMG study on the Indian media and entertainment industry, he said: “Music events have continued to hold a large share in the overall live-events pie.”

Scheduled to start December 27, the four-day festival is expecting over 120,000 footfalls this year.

“We had around 110 DJs who performed last year and the numbers will only go up this year with a mix of new and established names,” he said.

Goa annually attracts three million tourists, of whom half a million are foreigners, mostly Russians. However with a slump in Europe’s economy, the Russia-Ukraine conflict and several Russian tour operators going bankrupt, the number of Russian tourists travelling to Goa is expected to drop by at least 30 percent this year.