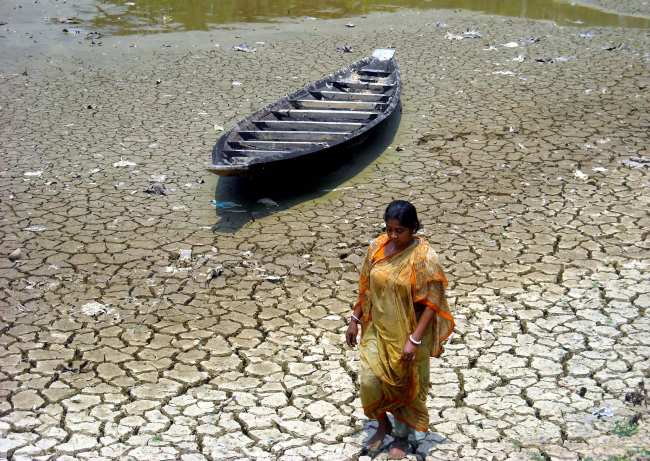 Whoever wins the general election on May 16, will the water supply position in the eco-sensitive Taj Trapezium zone improve? This is the million dollar question everyone in the Taj city is asking today.

With the Yamuna reduced to a “sewage canal”, the water crisis in the Taj city has assumed alarming dimension. Each day, people in some locality or the other have been on the road demanding uninterrupted supplies, but the century-old Agra Water Works finds its capacity severely handicapped by poor and inadequate raw water supply from the Yamuna river.

Against a peak demand of more than 500 MLD in this hot summer month, the Agra Jal Sansthan is not able to supply even half. “There is not enough water in the river Yamuna for processing. We are doing our best” was all that General Manager Manju Rani Gupta had to offer.

Agra Municipal Corporation Commissioner Indra Vikram Singh said: “We have requested the authorities in Mathura to discharge more water from the Gokul Barrage for Agra’s needs.”

A thousand cusecs was released from the Gokul barrage on Saturday but that is hardly enough for the growing demand of the city.

Agra’s two waterworks, one at Jeoni Mandi which is more than a century-old and the new one at Sikandra, with more capacity and better technology are under acute pressure. “It happens every summer, but the authorities never draw the lessons in good time. Agra had copious rains last summer and the river was full till December. Where has all the water gone?” asks social activist Rajiv Saxena.

Despite billions of rupees invested in infrastructural development in the eco-sensitive Taj Trapeizium Zone, spread over 10,000 sq km, the districts of Agra, Mathura and Firozabad continue to face acute shortage of power and water. People in Firozabad are up in arms against the administration, demanding more water. Work on a canal to bring water from the Ganges river is progressing at a snail’s pace. In Mathura, even with the Gokul barrage, the water table has not gone up. The wells are dry and tap water is not reaching remote colonies.

In Mathura, question marks have been raised on the utility of the Gokul Barrage, which has failed to meet the city’s water needs; nor has it helped in raising the water table in the district.

The glass city of Firozabad continues to suffer long hours without power and water. Erratic power supply has hit production in the glass factories, said Ashok Mittal, a bangle manufacturer. “The situation has worsened after the polling day on April 24. Earlier the power supply was fairly ok, perhaps to woo voters,” he added.

Activist D.K. Joshi, who filed a petition in the Supreme Court 10 years ago and secured orders for a Rs.1,000 crore ($167 million) investment in water supply and drainage infrastructure for the city, said: “The plans that they have of bringing Ganga Jal (water) to Agra at an exorbitant cost of Rs.3,000 crore, as investment from the Japanese Bank (JBIC) will go waste like earlier schemes. The corruption in the ranks of the government has resulted in such chaotic conditions and no one knows what is in store for this great Mughal city.”

Joshi reeled off figures to show how crores of rupees had been squandered away without any meaningful or discernible results.

The Yamuna river water is not only necessary to sustain human life in the city but also to ensure the safety of the Mughal monuments including the Taj Mahal and the Red Fort, not to mention other half a dozen buildings along the river banks, said Braj Mandal Heritage Conservation Society president Surendra Sharma.

Mughal historian R. Nath has time and again urged the government to ensure there is sufficient water in the river for the safety of the Taj Mahal, which stands threatened without water in the river. “When Shah Jahan selected this particular site for constructing the Taj Mahal, it was the huge water body almost like a sea in the background. To run the fountains and green the lawns, Yamuna water was lifted to fill a tank which distributed water all over through a scientifically designed network,” R. Nath said over the phone from Ajmer.

Without water in the river, not only would the foundation of the marble wonder suffer damage but the tilt of the minarets could also increase, he added. Nath lamented the fact that successive governments had not only ignored this important aspect of conservation but had failed to fill the river with water, though thousands of crores of rupees had been spent on questionable projects for the beautification and so-called conservation of monuments.

“The problem is not only of quantity but also quality of water in the river. Unless they desilt and dredge the river on a massive scale from Delhi to Agra, the underground aquafiers would not be charged and the water table will not rise. The storage capacity of the river can be increased only when silt and deposits of dirt are scooped out,” said environmentalist Ravi Singh.

In the just-concluded general election campaign, no political party offered a clear-cut policy frame to solve Agra’s acute water shortage. The city is expanding and the population is already more than two million. Due to the needs of agriculture and the wasteful lifestyle of urbanites, the demand for water will only grow, but the state government has no idea how the demand-supply gap will be met, social activists in the town said.