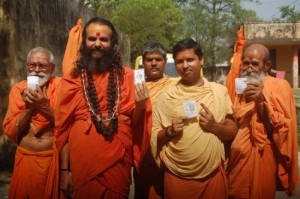 The 2014 general election saw an all-India voter turnout of 66.38 percent, the highest-ever in Indian polls, with 15 states and union territories registering their highest-ever polling percentages, the Election Commission said Monday.

“The voting percentage for the whole nation this time was 66.38 percent, which is the highest- ever in history,” Deputy Election Commissioner Vinod Zutshi said at a press conference here.

The percentage was likely to increase marginally later, he added.

“Goa registered the highest increase in voter turnout compared to 2009 with 21.59 percent more votes polled. It was followed by Gujarat and Rajasthan where 15.41 percent and 14.62 more votes were polled than in 2009,” he said.

In India, the previous highest voter turnout – 64 percent – across the country was recorded in 1984. The turnout this time is considerably higher than 2009, which saw a 58.19 percent turnout nationally.