A day after his stunning defeat in a primary sent shock waves through the Republican party, House majority leader Eric Cantor announced his decision to quit the second top job in the party hierarchy. 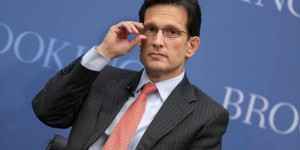 Cantor, the first sitting House majority leader to lose a primary since the position was created in 1899, was vanquished in Tuesday’s primary in Virginia by a little known college professor Dave Brat backed by the ultra conservative tea party faction. The tea party movement advocating a reduction in US government spending and taxes draws its inspiration from the famous Boston Tea Party of 1773.

The second most powerful party figure after Speaker John Boehner in the Republican controlled House, Cantor announced Wednesday he would quit July 31 and not seek another term in the House.

The decision triggered a scramble among conservatives to replace him in an election set for June 19. It has also energised tea-party supporters ahead of the November Congressional elections.

Critics and analysts cited by CNN said Cantor neglected his base at home in Virginia and paid the price.

Conservatives in the party are already demanding someone from a Republican governed state be selected to represent their views at the leadership table, it said.

CNN cited Republican strategist John Feehery as saying Cantor’s defeat throws the Republican conference into chaos and will make it harder to get anything done.

The immediate fallout focused on immigration, one issue that clearly illustrates divisions between establishment Republicans and arch-conservatives, it said.

“President Barack Obama is finally rid of Eric Cantor, the man who aggravated him most in Washington,” said the Politico. “But the price may be immigration reform, a priority and potential legacy achievement for Obama,” it suggested.

However, Obama disagreed saying Cantor’s defeat showed “too little conviction about what was right”.

Insisting that immigration reform is not dead, Obama said at a Democratic Senatorial Campaign Committee fundraiser in Weston, Massachusetts that “at a certain point issues are important enough to fight for.”

“If you think because of politics, you want to maintain a status quo that is broken … you don’t belong in Washington,” he said.

Obama did not refer to Cantor by name, instead calling Tuesday’s vote “an interesting election.”

Commenting on Cantor’s defeat, the influential New York Times said “the forces of political nihilism not only remain alive and well within the Republican Party, but they are on the rise.”

The Times wondered if Cantor and other members of the Republican leadership will “be replaced by even more divisive politicians determined to stage confrontations with the president at every juncture?”

But the Washington Post editorially suggested Cantor’s loss shouldn’t doom progress in Washington. “It’s a big deal, yes, but we believe – and hope – that it may not be quite as definitive as some are saying.”