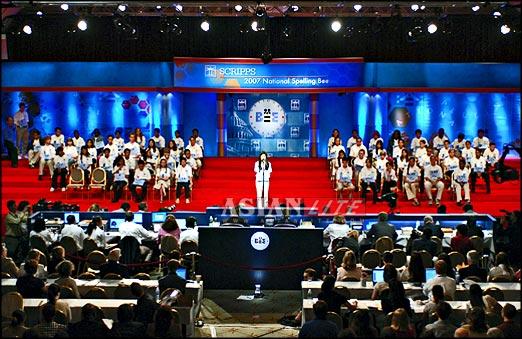 Two Indian American youngsters made history as Sriram Hathwar and Ansun Sujoe were declared co-champions in the Scripps National Spelling Bee contest after 52 years and for just the fourth time in the contest’s history.

“Whatever,” said Sujoe, 13, 7th grader from Fort Worth, Texas, as the seconds ticked down at the contest at the National Harbour Thursday night.

He couldn’t get the word, “feuilleton,” out of his mouth, but he spelled it correctly.

The duo spelling victory for Indian-Americans for the seventh time in a row share the title and a $30,000 scholarship.

In the final-round duel, Ansun and Sriram were both named champions after spelling a dozen words correctly in a row and nearly exhausting the 25 designated championship words.

Earlier, Sriram opened the door to an upset by Ansun after he misspelled “corpsbruder,” a close comrade.

But Ansun was unable to take the title because he got “antegropelos,” which means waterproof leggings, wrong.

According to Spelling Bee Sriram, when not studying spelling, plays the oboe, piano and chess to keep his mind stimulated.

A seasoned traveller, Sriram has been all over the world, but he still has Japan, New Zealand, Switzerland, France and South Africa on his travel bucket list.

Because he has been to the Scripps National Spelling Bee four times already, Sriram once produced a TEDx talk about his experiences in the Bee.

Ansun is so musically gifted that he not only plays piano, guitar and bassoon, he also has perfect pitch.

In other words, he can instantaneously identify or sing any given musical note without a reference pitch.

Ansun made his second trip to the Scripps National Spelling Bee this year. He also participated in 2013.

Six Indian American youngsters made it among 12 finalists after top contender Vanya Shivashankar of Olathe, Kansas, was eliminated in the semi-finals Thursday.

Vanya,12, a three-time finalist whose older sister was the 2009 bee winner, correctly spelled both words onstage but didn’t get a high enough score on two computerised spelling and vocabulary tests to advance.

Last year’s winner, New York middle-schooler Arvind Mahankali, was the sixth Indian American in a row to take the title and a $30,000 scholarship.

Indian Americans, who have won the championship eleven times in the last 16 years, swept the top three spots this year as they did in the previous two years.