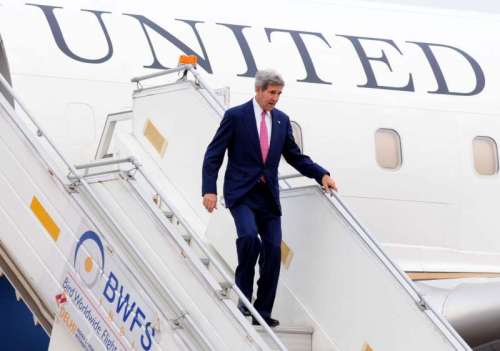 US Secretary of State John Kerry met his Iranian counterpart Mohammad Javad Zarif in New York over the current round of nuclear talks.

Kerry Sunday said that the resumption of talks between Iran and the P5+1 group — Britain, China, France, Germany, Russia and the US — is an opportunity to work towards a comprehensive agreement on Iran’s nuclear programme, Xinhua reported.

According to officials, Kerry and Zarif met for over an hour.

They reviewed the status of the current negotiations on Iran’s nuclear programme and discussed the progress and future efforts.

The two have agreed to meet again later this week.

Iran and the P5+1 group started the seventh round of talks over Tehran’s nuclear programme Friday at the UN headquarters in New York.

The talks are expected to last a week.

In July, Iran and the P5+1 group agreed to extend negotiations over Tehran’s controversial nuclear programme for another four months till Nov 24 as they could not narrow the significant gaps on core issues during the past six months.