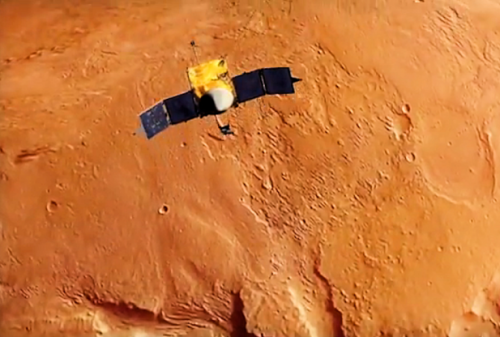 Curiosity Rover (@MarsCuriosity) welcomed it with a “Namaste”.

To this, ISRO’s Mars Orbiter (@MarsOrbiter) replied: “Howdy @MarsCuriosity? Keep in touch. I’ll be around.”

“The spacecraft (Orbiter) successfully entered the Martian orbit at 7.55 a.m. and is located at about 515 km from its surface…,” a senior space official told IANS at the mission control centre here.

Radars at the earth stations of NASA at Goldstone in the US, Madrid in Spain, Canberra in Australia and India’s own deep space network at Baylalu near Bangalore received the radio signals from the Orbiter, confirming its insertion into the Mars orbit.

Prime Minister Narendra Modi, who witnessed the event from an Indian Space Research Organisation (ISRO) facility in Bangalore, heartily congratulated the ISRO scientists and said that the successful Mars mission “must become a base for challenging the next frontier”.

The success “will go down as landmark in history”, said a visibly delighted Modi.

India’s Mars mission is “a shining symbol of what we are capable of as a nation” and we have gone beyond boundaries of human enterprise and imagination, he added.

The prime minister said that the MOM was built “indigenously, in a pan-Indian effort” and added that India is the only country to have succeeded in its very first attempt.

“With today’s spectacular success, ISRO joins an elite group of only three other agencies worldwide to have successfully reached the Red Planet,” he added amidst applause.

Modi, wearing a red coloured jacket, said that the “odds were stacked against us”.