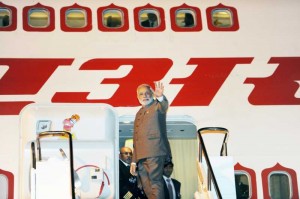 Shunned by the US for nearly a decade, a triumphant Indian Prime Minister Narendra Modi flies into New York Friday to start what he himself has called “a new chapter in our strategic partnership.”

Modi gets into Washington for his first meeting with President Barack Obama only on Monday after an address to the UN general assembly Saturday and a rock star-like reception by the Indian-American community at Madison Garden in midtown Manhattan Sunday.

“The visit is a big moment for Mr. Modi, who offers himself as a metaphor for the India he wants to build – ambitious, confident and impatient with slackness of any kind,” said the New York Times.

“Rarely has any world leader come full circle the way Mr. Modi has” noted the influential US daily in a report from New Delhi titled “Defying Expectations in India, Modi Begins Key Trip to US.”

“Denied a United States visa for nearly a decade as punishment for his handling of religious riots that broke out in the state he then led, Mr. Modi flies into New York as an immensely popular leader and a sought-after strategic partner, viewed as uniquely capable of balancing the might of a rising China,” it said.

Building bridges with Modi since his sweeping election victory, Obama invited him to visit Washington even before he was sworn in as Prime Minister.

And as Obama’s honoured guest Modi will stay at the 190-year-old Blair House, the US president’s guesthouse, across the street from the White House. He will meet Obama for a private dinner Sep 29 before their formal summit the next day.

Modi will be meeting the CEOs of several Fortune 500 companies as well.

In New York, besides his address at Madison Square Garden expected to be attended by more than 18,000 people and watched by thousands more live on big screens in Times Square and across the country, he will also make an appearance at a Central Park festival featuring rap star Jay-Z.

But a meeting with Pakistani Prime Minister Nawaz Sharif is not on the cards as of now.

Several US policy experts see the Modi visit as a golden opportunity to repair India-US relations strained with a major diplomatic row over the December arrest and strip search of an Indian diplomat in New York and tiffs over trade issues.

The Obama administration sees the recent election of Modi-led majority government in India “as an opportunity to take the relationship to the next level,” according to Strobe Talbott who served as President Bill Clinton’s deputy secretary of state.

Ashley J. Tellis, senior associate at Carnegie Endowment for International Peace, who was involved as an adviser in negotiating the civil nuclear agreement with India, also believes that Modi’s visit will provide the two countries with “a golden opportunity to repair their faltering partnership.”