With just six months until its first scheduled trip to space in December this year, engineers at NASA’s Kennedy Space Center have begun the final assembly of Orion spacecraft that could take man to Mars. 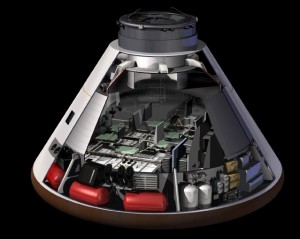 “Now that we are getting so close to launch, the spacecraft completion work is visible every day,” Mark Geyer, NASA’s Orion Program manager, was quoted as saying.

“Orion’s flight test will provide us with important data that will help us test out systems and further refine the design so we can safely send humans far into the solar system to uncover new scientific discoveries on future missions,” Geyer added.

With the crew module now in place, the engineers will secure it and make the necessary power connections between it and the service module over the course of the week, NASA said in a statement.

Once the bolts and fluid connector between the modules are in place, the stacked spacecraft will undergo electrical, avionic and radio frequency tests, it added.

In December, Orion will launch 5,760 km into space in a four-hour flight to test the systems that will be critical for survival in future human missions to deep space.

After two orbits, Orion will re-enter the earth’s atmosphere at almost 32,000 km per hour before its parachute system deploys to slow the spacecraft for a splashdown in the Pacific Ocean.

In the future, Orion will launch on NASA’s new heavy-lift rocket, the Space Launch System (SLS).

According to NASA, more powerful than any rocket ever built, SLS will be capable of sending humans to deep space destinations such as an asteroid and eventually Mars.