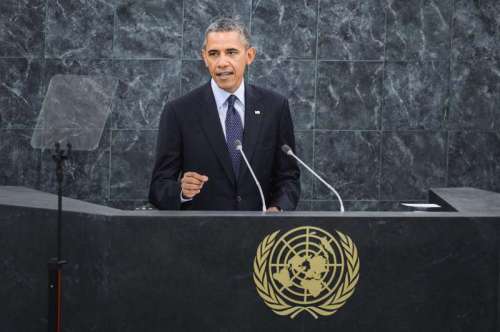 President Barack Obama  called on all nations to join the fight against the Islamic State (IS) and other terrorists whose brutality “forces us to look into the heart of darkness”.

He told the UN General Assembly, “Collectively, we must take concrete steps to address the danger posed by religiously motivated fanatics, and the trends that fuel their recruitment.”

Speaking after decisively taking on the IS and another terrorist group by launching air strikes, he made combating terror the main focus of the US president’s annual address to the Assembly, while also reiterating his tough line on Russia over Ukraine.

There was no mention of South Asia, but he made a veiled reference to China’s disputes with other East and Southeast Asian nations.

“America is and will continue to be a Pacific power, promoting peace, stability, and the free flow of commerce among nations,” he said.

“But we will insist that all nations abide by the rules of the road, and resolve their territorial disputes peacefully, consistent with international law.”

Obama said the “campaign against extremism goes beyond a narrow security challenge” and referred to corruption and poverty as factors fuelling terrorism and spreading extremism to other places.

“For while we have methodically degraded core Al Qaeda and supported a transition to a sovereign Afghan government, extremist ideology has shifted to other places – particularly in the Middle East and North Africa, where a quarter of young people have no job; food and water could grow scarce; corruption is rampant; and sectarian conflicts have become increasingly hard to contain.”

In calling for action against extremism, Obama said, “As an international community, we must meet this challenge.” He also “reaffirmed that the United States is not and never will be at war with Islam. Islam teaches peace”.

On Russia, Obama said its actions in Ukraine “challenged the post-war order” with “a vision of the world in which might makes right”, adding “We will impose a cost on Russia for aggression”.

The other points in his speech dealt with dealing with the Ebola crisis and poverty around the globe.

“America is committed to a development agenda that eradicates extreme poverty by 2030. We will do our part – to help people feed themselves; power their economies; and care for their sick. If the world acts together, we can make sure that all of our children can enjoy lives of opportunity and dignity,” he said.

While the crises that he addressed painted a dark picture of the world, the US president also said that overall the world is a better place.

“I often tell young people in the United States that this is the best time in human history to be born, for you are more likely than ever before to be literate, to be healthy, and to be free to pursue your dreams.”

Obama referred to these “signposts of progress”: “The shadow of World War that existed at the founding of this institution has been lifted; the prospect of war between major powers reduced. The ranks of member states has more than tripled, and more people live under governments they elected.

“Hundreds of millions of human beings have been freed from the prison of poverty, with the proportion of those living in extreme poverty cut in half. And the world economy continues to strengthen after the worst financial crisis of our lives.”