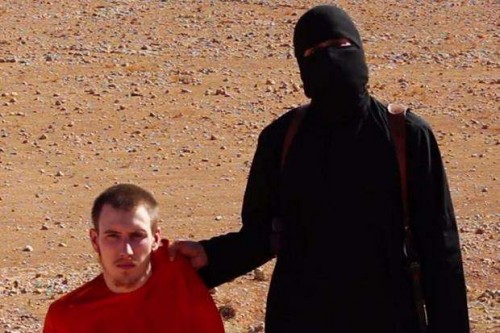 A video has been circulating online purporting to show members of the Islamic State(IS) group beheading several Syrian soldiers and a US aid worker.

The footage, released , showed the beheading of a captured American aid worker, Abdul-Rahman Kassig, and at least 12 people who IS said were Syrian pilots and officers in President Bashar al-Assad’s forces, Al Jazeera reported.

The aid worker was earlier known as Peter Kassig before he converted to Islam. He was kidnapped in Syria last year.

The clip was circulated through credible social media accounts that have previously shared videos that were later verified, an Al Jazeera correspondent said.

But it remains hard to verify the authenticity of the footage, he said.

The video also showed a bloodied head on the ground, which was that of Kassig, IS said in the video.

“This is Peter Edward Kassig, a US citizen of your country. Peter, who fought against Muslims in Iraq, was serving as a soldier in the American army, does not have much to say,” a masked person standing near the head said.

“His previous cellmates have already spoken on his behalf.”