US Defence Secretary Chuck Hagel Saturday ordered the aircraft carrier USS George H.W. Bush to move from the North Arabian Sea into the Gulf, amid escalating violence in Iraq. 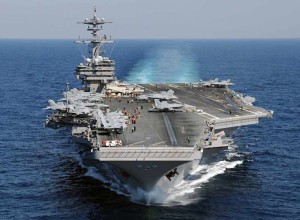 The aircraft carrier will be accompanied by the guided-missile cruiser USS Philippine Sea and the guided-missile destroyer USS Truxtun. The ships are expected to complete their transit into the Gulf later Saturday evening, Kirby said.

The USS George H.W. Bush left its home port of Norfolk, Virginia, in February and is operating in the Middle East region as part of an ongoing rotation of forward-deployed forces to support maritime security operations, he added.

“American naval presence in the Arabian Gulf continues to support our longstanding commitments to the security and stability of the region,” Kirby said.

The Pentagon move came as Obama said that he is considering a range of options to support Iraqi security forces to fight the forces of the Islamic State in Iraq and Levant (ISIL), an offshoot of Al Qaeda, which is making big advances in Iraq in recent days.

While ruling out sending US troops back to Iraq, Obama did not rule out of the possibility of authorising drone strikes or air bombings to help Iraqi forces repel the militants who are pressing on to the capital city of Baghdad, after capturing the second largest city Mosul and Tikrit, the hometown of former Iraqi president Saddam Hussein.