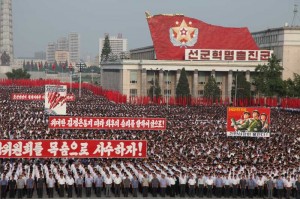 The US government remained silent about North Korea’s accusations against President Barack Obama, whom a spokesman of the North Korean National Defense Commission compared to a “monkey” and said he forced Sony to premiere the movie “The Interview” on Christmas Day.

North Korea  blamed the US for the repeated hacking attacks currently affecting its principal state media.

In addition, the regime led by Kim Jong-un again denied that it was behind the cyber attack against Sony Pictures, as claimed by the White House.

The White House believes the attack was a response to the film “The Interview”, a comedy about a US plot to assassinate the North Korean dictator.

“If the US wants to keep blaming us, it should offer proof as soon as possible. And if not, they could carry out an investigation with our help,” the spokesman for the North Korean National Defense Commission said.

“What would happen if someone made a movie about terrorist attacks or urged the assassination of Barack Obama? Would the US keep defending freedom of speech?” the spokesman asked.

Pyongyang resorted to a more belligerent tone when saying directly that Obama “is the chief culprit who forced the Sony Pictures Entertainment to indiscriminately distribute the movie” on Christmas Day.

“Obama always goes reckless in words and deeds like a monkey in a tropical forest,” the spokesman said.

A group called the Guardians of Peace claimed responsibility for the cyber attack on Sony Pictures Entertainment, and warned it would make 9/11-type terrorist attacks on theaters showing “The Interview.”

While big theater chains tended to back out, some 300 independent movie houses premiered the film on Dec 25 and brought in a total of around $1 million, Sony said.

Obama congratulated Sony’s decision to authorise the movie’s debut. He earlier criticised cancellation of the premiere, saying it was a “mistake”.