Iraqi security forces withdrew from the Syrian border in the Sunni province of Anbar, an official said Thursday. 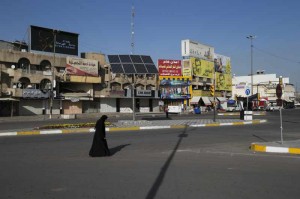 The Iraqi army, police and border guards withdrew late Wednesday night from their positions on the border with Syria near the city of Qaim, some 330 km northwest of the Iraqi capital of Baghdad.

Also in the province, Sunni militants swept a major military base of the al-Mazraa just west of the militant-seized city of Fallujah, some 50 km west of Baghdad, after the army soldiers withdrew suddenly overnight toward Baghdad, the official said.

The gunmen also seized large amounts of vehicles, weapons and ammunition from the base, the official added.

Meanwhile, militants seized the battlefield-town of Saqlawiyah, 10 km south of Fallujah, after overnight fighting with the troops who left their bases around the town and headed toward Baghdad, he said.

Iraqi security forces are still fighting in the city of Samarra, some 120 km north of Baghdad, with militant groups, including the Islamic State in Iraq and Levant (ISIL), an Al Qaeda breakaway group in Iraq.