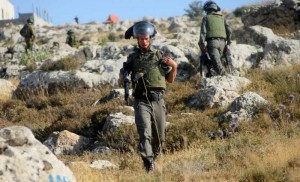 The officials said that the war jets fired one missile at a training facility that belongs to Islamic Jihad in the southern Gaza Strip town of Rafah, while two other missiles targeted areas used for launching rockets into southern Israel.

They also said that the war jets fired two missiles on training facilities that belong to Islamic Hamas movement’s armed wing in the southern Gaza Strip town of Khan Younis.

The Gaza emergency spokesperson told reporters that one Palestinian was moderately injured in the airstrikes on southern Gaza Strip town of Rafah.

The airstrikes were Israel’s response to the rockets fired earlier from the coastal enclave into southern Israel, for which no one has claimed responsibility.

The intensive Israeli airstrikes on the Gaza Strip were carried out amid a growing tension between Israel and the Palestinians after Israel officially announced that three Israelis were kidnapped in southern West Bank Thursday.

The spokesperson also said that a seven-year-old boy died of his wounds sustained late this week when Israeli war jets struck a Palestinian militant who drove a motorbike in northern Gaza Strip and killed him.