Supporters of deposed Islamist president Mohamed Morsi staged several rallies around Egypt Friday, two days ahead of the expected inauguration of President-elect Abdel Fattah al-Sisi after his landslide victory in the elections held late in May.

The rallies, under the theme “The military think it (Egypt) is their own backyard”, was organised by the National Alliance to Support Legitimacy, which, along with the Muslim Brotherhood, combines forces, mostly with Islamist background, who demand the reinstatement of Morsi. 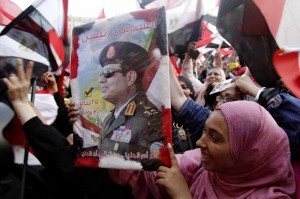 The alliance noted in a statement released Wednesday that “the door is still open to comply with the demands of the people”, or else it called all revolutionaries to mass protests July 3, which marks one year of Morsi being ousted by the army following popular protests against his rule.

The alliance called its supporters to continue protesting events, especially on the inauguration day, scheduled for Sunday.

“The youth and students shall be on the front lines everywhere.”

The alliance has organised similar rallies almost every Friday since Morsi was ousted by the army, following massive popular protests against his rule, July 3, 2013.

The country has since witnessed unrest, which worsened after the killing of hundreds of Morsi supporters during the dispersal of their sit-ins last August.

Several army and police soldiers were also targeted in terrorist attacks launched by groups who also asked for Morsi’s return.

Al-Sisi, who backed the ouster of Morsi in July, won over 96 percent of the votes in the election that was held late in May.