Iranian President Hassan Rouhani is expected to pay his first visit to Turkey Monday in a bid to improve bilateral ties between the two countries that have been strained by the developments in Syria, media reported Saturday.

It is Rouhani’s first visit to Turkey since Akbar Hashemi Rafsanjani’s presidential tour in 1996. 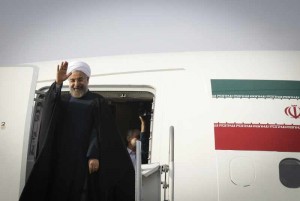 During Rouhani’s visit to Ankara, the two countries are expected to sign at least six new agreements to enhance political, economic and cultural ties.

Since Rouhani was elected last year, the two countries have been trying to repair their strained relations over the on-going three-year-old conflict in Syria, in which Tehran and Ankara back different sides.

The strained relations have also seen a drop in bilateral trade.

According to the latest available data from Turkish statistics agency, trade in the first 11 months of 2013 declined to $13.5 billion, a 35 percent drop from 2012.

While visiting Iran in January, Erdogan said the two neighboUring countries agreed to work together to more than double their trade to $30 billion in 2015.