An influential Shiite cleric Friday called on Iraqis to take up arms against insurgent groups that have taken control of large parts of the country, his representative said. 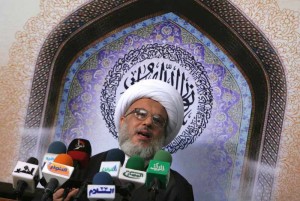 “The situation in Iraq is very serious and entails those who are able to volunteer to take up arms to defense their homeland,” Sheikh Abdul Mehdi al-Karbalai read from a fatwa issued by the Shiite cleric Grand Ayatollah Ali al-Sistani.

“The defense of the armed forces and other security services for Iraq is a holy defense, and the terrorism is far from the spirit of Islam,” Xinhua quoted al-Karbalai as saying during the weekly prayer of Friday.

He said Iraq was facing a great challenge and a great danger, and that the terrorists’ goal was not to take control of some provinces, such as Nineveh and Salahudin, but they said they were targeting all the provinces, particularly the capital Baghdad, as well as the holy Shiite provinces of Karbala and Najaf.

“Therefore, confronting militant groups was the responsibility of all Iraqis, not for a certain sect or a particular party,” he added.