Abdel-Fattah El-Sisi on Sunday was sworn-in the seventh president of Egypt at a ceremony in Cairo. 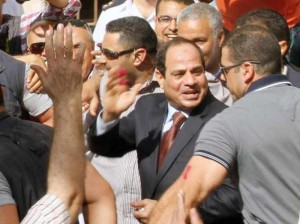 The ceremony commenced with verses from the Quran followed by short speeches by head of the constituitional court Maher Samy and its charges d’affaires Anwar Assay.

The inauguration will continue Sunday afternoon with ceremonies at the Ittihadiya and El-Kobbeh presidential palaces, which will be attended by foreign representatives and Egyptian public figures.

Mohamed Morsi was the first Egyptian president to be sworn in at the Supreme Constitutional Court.

Morsi, who was ousted by the army amid mass protests in July 2013, took the presidential oath in Tahrir Square among thousands of supporters, then at the court and finally at a ceremony attended by public figures and foreign guests at Cairo University.