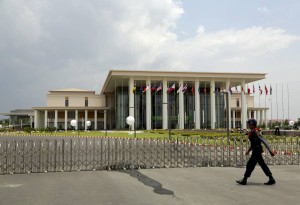 The 24th ASEAN leaders’ meeting started here Sunday, an event that Myanmar President U Thein Sein described as a symbol of “unity and dedication for building a better future for the region and the people”.

“It also reflects the importance that we attach to our collective and coordinated endeavours to promote peace, stability, and economic prosperity of our region, and the well-being of our people,” the president said in his speech.

Themed as “Moving forward in Unity to a Peaceful and Prosperous Community”, the summit is expected to review the progress towards the realisation of the Association of Southeast Asian Nations (ASEAN) Community by the end of 2015 and discuss ways to overcome challenges in the process of economic integration.

Noting there are only one-and-a-half years ahead, U Thein Sein stressed it was imperative to take a comprehensive review on the implementation of the blueprints for ASEAN Community, and to ensure that the targets were fully realised in the community building process, Xinhua reported.

“We are at a critical juncture and we need to make sure that all necessary steps in community building are taken in a timely manner for the realisation of the ASEAN Community,” he said.

The leaders will also deliberate the ASEAN Community Post-2015 vision, and reiterate ASEAN commitment in its collective efforts for a single market and production base.

“It is also equally important to map a clear direction for the ASEAN Community beyond 2015 to keep it relevant to the changing global environment,” the president said.

In this regard, ASEAN leaders should take into consideration the changing political environment and socio-cultural developments of the region and the world, he added.

Myanmar, which holds the ASEAN rotating presidency this year, is hosting the ASEAN summit for the first time since it joined the regional bloc in 1997.