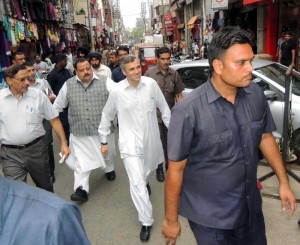 The chief minister rushed here from Srinagar despite the Eid-ul-Adha festival to attend the cremation of five civilians killed in mortar shelling by Pakistan Rangers in Arnia sub-sector of R.S. Pura in Jammu district.

Talking to media persons, Abdullah said Monday’s targeting of civilians by Pakistan indicated the frustration of the government there.

“Pakistan Prime Minister Nawaz Sharif tried to raise the pitch over Kashmir during his UN general assembly address. But he did not find any takers for his rant over Kashmir. It (Pakistan) is now showing its frustration by targeting civilian areas on our side of the border,” he said.

The chief minister also visited the Jammu medical college hospital and made enquiries about the well being of the injured people.

Pakistan Rangers Monday resorted to indiscriminate firing along the international border in Jammu district, killing five civilians and injuring 29 others, while the Pakistan Army violated the 2003 bilateral ceasefire in Poonch district, officials said.

Five civilians, including a 15-year-old girl and her 50-year-old father were killed in indiscriminate mortar shelling and automatic weapons firing from Pakistan in Arnia sub-sector of R.S. Pura, a police officer said here.

“So far, 29 people, most of them civilians, have been injured in the ceasefire violation by Pakistan… The Pakistani Rangers are using mortars and automatic weapons in the attack,” he said.

The injured have been admitted to the Government Medical College and Hospital here.

Witnesses said Pakistani mortar shells had fallen inside the Arnia bus stand, which is more than 4 km away from the international border.

Senior civil and police officials rushed to Arnia to take stock of the situation.

Jammu Divisional Commissioner Shant Manu said: “We have already put in place a contingency plan to minimise civilians casualties. The situation is being closely monitored by us. I have visited the area in the morning. Firing exchanges have now stopped there.”

Hours after the incident, the Pakistan Army resorted to unprovoked firing at the Indian positions along the the Line of Control in Poonch district, a defence ministry official said here.

The firing started at 8.30 a.m. and is still continuing, the official said.

“Pakistan Army violated the ceasefire in Bhimber Ghali area of the Line of Control by resorting to unprovoked firing at our positions,” Defence Ministry spokesman Col Manish Mehta said.

“Pakistan Army is using mortars and automatics, equal effective response of the unprovoked firing was given by our soldiers. No causality is reported on our side,” he said.

The Indian Army guards the LoC while paramilitary Border Security Force guards the international border in Jammu and Kashmir.